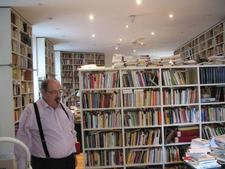 The Italian author Umberto Eco passed away last February at the age of 84. He was probably best known for his novel "The Name of the Rose", a medieval detective story that was later made into a film starring Sean Connery.

Being something of a cross between Mark Twain and a densely erudite scholar, he was quoted as describing himself as “a serious professor who writes novels during the weekend.” He was, in fact, a serious scholar having studied medieval philosophy, literature, and aesthetics at the University of Torino, Italy. In 1975 he began serving as a professor of semiotics at the University of Bologna, Italy, a post he held for over thirty years. His academic bibliography is extensive with several hundred books and papers to his name.

To understand some of the common threads throughout his fiction it might help to have some basic understanding of semiotics. It is real easy to get over your head trying to understand this esoteric field but for our purposes, all you need to know is that semiotics deals with the study of signs and symbols and their use or interpretation. 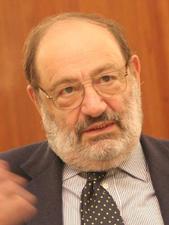 Eco’s interest in semiotics strongly colored his approach to storytelling. A strong thread through Eco’s writing is the blurred line between what is real, what is fake and whether or not it matters. A more pop culture way to think about it might be Stephen Colbert’s notion of truthiness. It’s how a “fact” might have the feeling of truth without the burden of actually being true. Many of his books address this either directly or in a roundabout kind of way. For example, in the post-script to "The Name of the Rose", Eco swears that the story is based on an actual account from an old manuscript that he found in a bookshop in Prague and later lost in a bad break-up. This is almost certainly a fictional account and illustrates the point nicely. The suggestion of a source manuscript lends weight and credibility to everything else. The reader gives the fake relic authority and, once believed, gives the rest of the story truthiness and once the reader swallows that first bite, the rest goes down smoothly. Similarly, his second book, "Foucault’s Pendulum", centers around a group of editors who decide to stitch together a chain of conspiracy theories into a master conspiracy as a lark to sell books. However, like Dr. Frankenstein’s monster, their new version begins to take on a life of it’s own with similar outcomes.

Umberto Eco’s fiction is not for everyone. They can sometimes be confusing, complex, and/or deliberately misleading. It is obvious that Eco is well read by the simple fact that his books are weighed down with so many references that it is impossible to keep track. In addition, he is unapologetically Italian. You would need to be an Italian of a certain age to fully appreciate many of the allusions in his books. However, if you appreciate a book that requires a little work from the reader and you don’t mind if the author is also a wicked liar, you might give him a try.

The Name of the Rose

It is the year 1327. Franciscans in an Italian abbey are suspected of heresy, but Brother William of Baskerville's investigation is suddenly overshadowed by seven bizarre deaths. Translated by William Weaver.

The Name of the Rose (movie)

Investigating the deaths of two monks, a visiting brother discovers a secret library containing rare books considered lost to the world and dangerous to the Catholic faith. 1986. Starring Sean Connery and Christian Slater.

Bored with their work, three Milanese editors cook up "the Plan," a hoax that connects the medieval Knights Templar with other occult groups from ancient to modern times. But in a fateful turn the joke becomes all too real, and when occult groups get wind of the Plan, they try to steal the secret to gain control of the earth.

It is April 1204, and Constantinople, the splendid capital of the Byzantine Empire, is being sacked and burned by the knights of the Fourth Crusade. Amid the carnage and confusion, one Baudolino saves a historian and high court official from certain death at the hands of the crusading warriors and proceeds to tell his own fantastical story. Born a simple peasant in northern Italy, Baudolino has two major gifts--a talent for learning languages and a skill in telling lies. Spurred on by myths and their own reveries, Baudolino and his merry band set out in search of Prester John, a legendary priest-king said to rule over a vast kingdom in the East--a phantasmagorical land of strange creatures with eyes on their shoulders and mouths on their stomachs, of eunuchs, unicorns, and lovely maidens.

Yambo, rare-book dealer who lives in Milan, has suffered a loss of memory-he can remember the plot of every book he has ever read, every line of poetry, but he no longer knows his own name, doesn't recognize his wife or his daughters, and remembers nothing about his parents or his childhood. In an effort to retrieve his past, he withdraws to the family home.There, he searches through boxes of old newspapers, comics, records, photo albums, and adolescent diaries. And so Yambo relives the story of his generation: Mussolini, Catholic education and guilt, Josephine Baker, Flash Gordon, Fred Astaire.

Nineteenth-century Europe--from Turin to Prague to Paris--abounds with subterfuge. Jesuits plot against Freemasons. Italian republicans strangle priests with their own intestines. French criminals plan bombings by day and celebrate Black Masses at night. Secret services are perpetrating forgeries, plots, and massacres. From the unification of Italy to the Paris Commune to the Dreyfus Affair to The Protocols of the Elders of Zion, Europe is in tumult and everyone needs a scapegoat. But what if, behind all of these conspiracies, both real and imagined, lay one lone man? What if that evil genius created the world's most infamous document?

Set in 1990s Milan, Numero Uno is a novel about the murky world of media politics, conspiracy, and murder. It is both a satire of Berlusconi era Italy and a gripping thriller. The novel weaves together two stories: the 1945 shooting of Mussolini and his mistress at Lake Como, and one about the depressed hack writer, Colonna. Colonna works for a newspaper committed to blackmail and mud slinging, rather than reporting the new. Amidst the thicket of dark dealings, a fragile love story blooms between the writer, and vulnerable Maia, who specializes in celebrity gossip yet cries over the second movement of Beethoven’s Seventh. Colonna gets break in his career and is hired to write the memoir of a journalist working for a media baron. He eventually gets pulled into a world of clandestine plots involving the murder of Aldo Moro, the sudden death of Pope John Paul I, the Vatican banking scandal, the P2 Masonic lodge, the shooting of Pope John Paul II, the CIA, red terrorists handled by secret services, and the corpse of Mussolini's body double.