The universe we inhabit is vast, perplexing, and unnerving. Equally so are the questions the universe provokes. How did the universe come to exist? What is the nature of the universe? How did life come to exist? Where else does life exist? Will humanity survive? Some of today’s greatest minds in science are searching for, and understanding of, the answers to these questions. In this brief reading list, world renowned scientists share humanity’s best, current answers to our most monolithic questions in accessible and entertaining texts. Spoiler alert: sometimes the answer is “we don’t know, yet” and that’s OK!

Brief Answers to the Big Questions, by Stephen Hawking.

Stephen Hawking was the most renowned scientist since Einstein, known both for his groundbreaking work in physics and cosmology and for his mischievous sense of humor. He educated millions of readers about the origins of the universe and the nature of black holes, and inspired millions more by defying a terrifying early prognosis of ALS, which originally gave him only two years to live. In later life he could communicate only by using a few facial muscles, but he continued to advance his field and serve as a revered voice on social and humanitarian issues.

The Greatest Story Ever Told -- So Far: Why are We Here?, by Lawrence M. Krauss.

In a landmark, unprecedented work of scientific history, Krauss leads us to the furthest reaches of space and time, to scales so small they are invisible to microscopes, to the birth and rebirth of light, and into the natural forces that govern our existence. His unique blend of rigorous research and engaging storytelling invites us into the lives and minds of the remarkable, creative scientists who have helped to unravel the unexpected fabric of reality—with reason rather than superstition and dogma.

Astrophysics for People in a Hurry, by Neil deGrasse Tyson.

What is the nature of space and time? How do we fit within the universe? How does the universe fit within us? There’s no better guide through these mind-expanding questions than acclaimed astrophysicist and best-selling author Neil deGrasse Tyson.

A Brief History of Time, by Stephen Hawking.

In the ten years since its publication in 1988, Stephen Hawking's classic work has become a landmark volume in scientific writing, with more than nine million copies in forty languages sold worldwide. That edition was on the cutting edge of what was then known about the origins and nature of the universe. Eager to bring to his original text the new knowledge revealed by these observations, as well as his own recent research, Professor Hawking has prepared a new introduction to the book, written an entirely new chapter on wormholes and time travel, and updated the chapters throughout.

A Universe from Nothing: Why There is Something Rather Than Nothing, by Lawrence M. Krauss

In a cosmological story that rivets as it enlightens, pioneering theoretical physicist Lawrence Krauss explains the groundbreaking new scientific advances that turn the most basic philosophical questions on their heads. One of the few prominent scientists today to have actively crossed the chasm between science and popular culture, Krauss reveals that modern science is addressing the question of why there is something rather than nothing, with surprising and fascinating results. The staggeringly beautiful experimental observations and mind-bending new theories are all described accessibly in "A Universe from Nothing," and they suggest that not only can something arise from nothing, something will always arise from nothing. 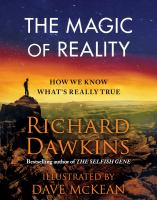 The Magic of Reality: How We Know What's Really True, by Richard Dawkins.

Magic takes many forms. Supernatural magic is what our ancestors used in order to explain the world before they developed the scientific method. The ancient Egyptians explained the night by suggesting the goddess Nut swallowed the sun. The Vikings believed a rainbow was the gods’ bridge to earth. The Japanese used to explain earthquakes by conjuring a gigantic catfish that carried the world on its back—earthquakes occurred each time it flipped its tail. These are magical, extraordinary tales. But there is another kind of magic, and it lies in the exhilaration of discovering the real answers to these questions. It is the magic of reality—science.

The Big Picture: On the Origins of Life, Meaning, and the Universe Itself, by Sean M. Carroll

Already internationally acclaimed for his elegant, lucid writing on the most challenging notions in modern physics, Sean Carroll is emerging as one of the greatest humanist thinkers of his generation as he brings his extraordinary intellect to bear not only on Higgs bosons and extra dimensions but now also on our deepest personal questions.  Where are we? Who are we? Are our emotions, our beliefs, and our hopes and dreams ultimately meaningless out there in the void? Does human purpose and meaning fit into a scientific worldview?