Ideally, journalists are tenaciously driven to find and report the truth. While journalists are heavily derided in some circles, every good journalist is an integral citizen to any healthy democracy. Luckily, we really don’t have to look very hard to find examples of journalists who are willing to face down virtually any obstacle to get at the truth. In the following selections you will read the spectacular stories of a few such journalists.

"In Extremis: The Life and Death of the War Correspondent Marie Colvin," by Lindsey Hilsum

Marie Colvin was glamorous, hard-drinking, braver than the boys, with a troubled and rackety personal life. With fierce compassion and honesty, she reported from the most dangerous places in the world, fractured by conflict and genocide, going in further and staying longer than anyone else.

"The View from the Ground," by Martha Gellhorn

"The View from the Ground" presents over six decades of Gellhorn's ruminations on political, civil, and social issues and crises, from a lynching in the American South in the 1930s through a recent visit to Cuba to see what is new and what remains the same in a country that is still off limits to most Americans. Gellhorn's ability to get to the truth of a situation heard makes her writing transcend the short shelflife of most reportage.

"Five Days at Memorial: Life and Death in a Storm-Ravaged Hospital," by Sheri Fink

"Five Days at Memorial," the culmination of six years of reporting, unspools the mystery of what happened in those days, bringing the reader into a hospital fighting for its life and into a conversation about the most terrifying form of health care rationing.

"Fear and Loathing: On the Campaign Trail '72," by Hunter S. Thompson

Hilarious, terrifying, insightful, and compulsively readable, these are the articles that Hunter S. Thompson wrote for Rolling Stone magazine while covering the 1972 election campaign of President Richard M. Nixon and his unsuccessful opponent, Senator George S. McGovern. Hunter focuses largely on the Democratic Party's primaries and the breakdown of the national party as it splits between the different candidates. 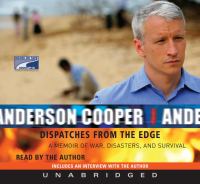 "Dispatches from the Edge: A Memoir of War, Disasters, and Survival," by Anderson Cooper

From the tsunami in Sri Lanka to the war in Iraq to the starvation in Niger and ultimately to Hurricane Katrina in New Orleans and Mississippi, Cooper gives us a firsthand glimpse of the devastation that takes place, both physically and emotionally, when the normal order of things is violently ruptured on a massive scale. Cooper had been in his share of life-threatening situations before, but he had never seen human misery quite like this. Writing with vivid memories of his childhood and early career as a roving correspondent, Cooper reveals for the first time how deeply affected he has been by the wars, disasters, and tragedies he has witnessed, and why he continues to be drawn to some of the most perilous places on earth.

"Slouching Towards Bethlehem," by Joan Didion

This classic collection of journalism defined the state of America during the upheaval of the sixties revolution. The essays feature barricades and bombings, mass murders and kidnapped heiresses.

"A Mighty Heart: The Brave Life and Death of My Husband, Danny Pearl," by Mariane Pearl

In A Mighty Heart, an astonishingly courageous woman tells the terrifying and unforgettable story of her husband's life and death. For five weeks the world watched and worried about Danny Pearl, a reporter for the Wall Street Journal, kidnapped in Karachi, Pakistan. And then came the news of his shocking and brutal murder. Danny's reasons for being in Karachi, the complete story of his abduction, and the intense effort to find him are told here for the first time. Mariane and Danny Pearl were working in South Asia, as they had been elsewhere in the world, because they believed that good reporting is essential to our understanding of ethnic and religious conflict around the globe. They knew the risks inherent in the life they chose and took conscientious precautions.The courage of Danny and Mariane is extraordinary, yet we are dependent on brave journalists everywhere to produce news coverage that educates us.

"The Race Beat: The Press, the Civil Rights Struggle, and the Awakening of a Nation," by Gene Roberts

This is the story of how America awakened to its race problem, of how a nation that longed for unity after World War II came instead to see, hear, and learn about the shocking indignities and injustices of racial segregation in the South--and the brutality used to enforce it. It is the story of how the nation's press, after decades of ignoring the problem, came to recognize the importance of the civil rights struggle and turn it into the most significant domestic news event of the twentieth century. Drawing on private correspondence, notes from secret meetings, unpublished articles, and interviews, veteran journalists Gene Roberts and Hank Klibanoff go behind the headlines and datelines to show how a dedicated cadre of newsmen--first black reporters, then liberal southern editors, then reporters and photographers from the national press and the broadcast media--revealed to a nation its most shameful shortcomings and propelled its citizens to act.