For many Americans, the 1950's were a golden age of driving. Route 66 from Chicago to Los Angeles took travelers through the nation’s heartland where they found iconic facilities to meet their needs. Gas stations, motels, and diners became notable landmarks, but many of these businesses did not serve African Americans. For African Americans, travel along the “mother road,” was a challenge that required them to pack their own provisions because they could not count on receiving goods or services, regardless of how much money they had.

One African American woman in Springfield was determined to operate a business that would accommodate African Americans. Alberta Ellis purchased the old city hospital shortly after World War II and converted it into a hotel. Located at 617 North Benton Street, it was just a few blocks north of Route 66 (St. Louis Street). By the 1950s, the new hotel had grown into a thriving business, thanks in part to word of mouth and promotion in African American publications like the 1956 edition of The Negro Travelers’ Green Book. This directory listed businesses that served the black community and was widely used by travelers to find safe accommodations. Alberta’s received a star on its entry, indicating it was a recommended hotel. Business was so brisk that Ellis purchased land 10 miles southwest of Springfield on Route 66. The land was used to grow fresh produce for the hotel and as a safe campsite when the hotel was booked.

Meanwhile, the Springfield Chamber of Commerce investigated segregation in 1958. Members of the chamber’s Civic Affairs Committee asked employees at local restaurants, theatres, and hotels if African Americans could receive service in their business. The answers from white-owned facilities was striking. Among 116 restaurants, 76 refused service; just two of 22 hotels allowed African Americans to stay and they could only attend performances at three of the city’s six theatres. The Chamber’s report concluded, “the findings of the our study are shameful for a city which boasts of its many churches and Christian atmosphere, and which takes such pride in the display of its having been chosen as one of the few “All-American” cities . . . If we, the members of the Springfield Chamber of Commerce, wish to make our city a truly All-American City, abiding by the spirit and letter of our nation’s Constitution, we will not wait until we are required by a decision handed down by the highest court of our land---we will open all of our privately-owned public places to all of our nation’s public.” 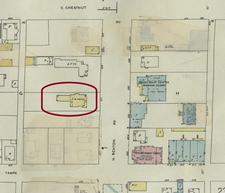 Passage of the Civil Rights Act of 1964 banned discrimination in public accommodations and ended the need for places like Alberta’s Hotel. Although the business declined in the 1960s, Alberta’s Hotel had performed a valuable service for many years. To learn more about the challenges faced by African American travelers and to see the 1956 edition of The Negro Travelers Green Book, check out this Independent Lens article.

The cover of the 1940 Green Book is courtesy of the New York Public Library. The photograph of the motel is courtesy of Missouri State University, Special Collections and Archives. The Sanborn Map shows Alberta's Hotel on Benton, circled in red.