The beloved HBO television series "Game of Thrones" is sadly coming to an end. Based on the epic fantasy book series from George R. R. Martin, millions of fans have fallen in love with the shocking storylines, captivating characters and sweeping scenery of Westeros. Luckily, there are still future events to look forward to, including the final two installments of the book series and a prequel television series from HBO. There are also a plethora of books that can help you fill the void, transporting you to magical realms, intriguing you with political schemes, and entertaining you with engaging characters. So while your favorite character may or may not have won the Game of Thrones, these stories are sure to win you over.

A Memory Called Empire by Arkady Martine
During a time of political instability, Ambassador Mahit arrives in the center of the Teixcalaanli Empire only to discover that her predecessor has died. Now Mahit must discover who is behind the murder, and save her station from Teixcalaan's unceasing expansion.

Game of Queens : The Women Who Made Sixteenth-Century Europe by Sarah Gristwood
The dramatic stories of 13 legendary female rulers who shaped the course of 16th-century Europe, offering insight into their considerable influence and the unique opportunities that shaped their rule.

Half a King by Joe Abercrombie
Heir to the throne Yarvi, prompted by the murder of his father, embarks on a kingdom-transforming journey to regain the throne, even though having only one good hand means he cannot wield a weapon.

Jade City by Fonda Lee
Green Bone warriors use the magic-enhancing powers of jade to protect their island nation of Kekon. But times are changing, as rival syndicates go to extreme lengths to consolidate their power and gain control of the city. 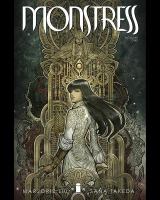 Monstress. Vol. 1, Awakening by Marjorie M Liu
Maika is a survivor of a cataclysmic war. In the face of oppression, Maika is searching for answers about her past as those who seek to use her remain just one step behind and all the while, the monster within begins to awaken.

Pawn of Prophecy by David Eddings
Garion the farm boy did not believe in magic dooms, but then he did not know that soon he would be on a quest of unparalleled magic and danger when the dread evil God Torak was reawakened.

The Pages of the Mind by Jeffe Kennedy
After the High Queen orders librarian Dafne Mailloux to submit to an alliance wedding with a barbarian king, Dafne realizes that she must learn the king's secrets if she is to save herself and her kingdom.

Titus Groan by Mervyn Peake
Titus, heir to Lord Sepulchrave and to Gormenghast Castle, is born and spends the first years of his life in a pinnacled castle amidst rituals and grotesque persons.