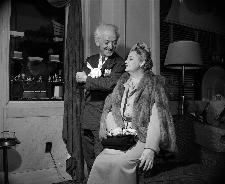 "There is no such thing as the hand being quicker than the eye.

"Just take it from Harry Blackstone, master of the magicians, who is stranded in Springfield until Saturday while waiting for his car to be repaired after it was involved in a minor accident here yesterday.

"'It’s all a science of misdirected thought -- this magic business,' he adds.
But ask any of a half dozen persons who had their thoughts misdirected in watching the wild-haired artist put on an impromptu demonstration in the lobby of the Colonial Hotel this morning and they’ll choose to disagree. They saw cards being pulled out of the air, others jumping out of the deck and a tightly knotted handkerchief which untied itself.

"But according to Blackstone the Great, there was nothing unusual about it, their thoughts were just put on something else.

"The sixty-five year old magician, his Texas-born wife and his stage manager were enroute to his wife’s former home and then will go on to Hollywood where Blackstone will make several television movies.

"Their trip was halted here about 4:30 p.m. yesterday when their car, driven by Mrs. Blackstone, collided with a truck on West 66. No one was [hurt]…and they’ll resume their trip some time Saturday. In fact, the accident also caused an interruption of a honeymoon jaunt for Blackstone and his bride of only two months.

"'Her name was Betsy Ross. She didn’t make the flag but she sure waves one – a Texas one,' he adds.
And the new Mrs. Blackstone, a comely forty-nine year old laughs and says: 'He’s always kiddin’ about something.'

"The stop here last night and for the next three days isn’t the first for Blackstone or his bride. He’s appeared here many time before, his most recent performance coming last year at the Shrine Mosque. Blackstone has been a professional magician since 1902 and is on the road, all over the world, most of the time.

"At the Colonial this morning onlookers were mystified by his sleight of hand. Blackstone, getting as big a kick out of his performance as anybody, even invited more people to gather around. At one juncture in his short performance today, however, several witnesses were more than surprised.

"After one of his card tricks. Blackstone reached into his inside coat pocket and pulled out a gleaming white handkerchief.

“'Wonder what this trick will be?' one onlooker asked.

"And without further adieu, the great Blackstone blew his nose." Leader & Press January 25, 1951.