The Amazon is Burning

The Amazon has been under fire in one way or another since the 1500s when explorers first set foot in South America. These titles tell many different tales from the region, both historical and modern day. Follow in the steps of the early explorers to discovery untold wonders or listen as the tales of indigenous peoples become scientific facts. The Amazon rainforest has proved time and again to be an awe inspiring and terrify place for people to wander.

Jungle : a harrowing true story of survival in the Amazon by Yossi Ghinsberg
Four travelers meet in Bolivia and set off into the heart of the Amazon rainforest, but what begins as a dream adventure quickly deteriorates into a dangerous nightmare, and after weeks of wandering in the dense undergrowth, the four backpackers split up into two groups. But when a terrible rafting accident separates him from his partner, Yossi is forced to survive for weeks alone against one of the wildest backdrops on the planet. Stranded without a knife, map, or survival training, he must improvise shelter and forage for wild fruit to survive. As his feet begin to rot during raging storms, as he loses all sense of direction, and as he begins to lose all hope, he wonders whether he will make it out of the jungle alive.

On the edge : the state and fate of the world's tropical rainforests : a report to the Club of Rome by Claude Martin
In 1972, The Limits to Growth introduced the idea that world resources are limited. Soon after, people became aware of the threats to the world's rainforests, the biggest terrestrial repositories of biodiversity and essential regulators of global air and water cycles. Since that time, new research and technological advances have greatly increased our knowledge of how rainforests are being affected by changing patterns of resource use. Increasing concern about climate change has made it more important than ever to understand the state of the world's tropical forests.

River of darkness : Francisco Orrellana's legendary voyage of death and discovery down the Amazon by Buddy Levy
From the acclaimed author of Conquistador comes this thrilling account of one of history's greatest adventures of discovery. With cinematic immediacy and meticulous attention to historical detail, here is the true story of a legendary sixteenth-century explorer and his death-defying navigation of the Amazon--river of darkness, pathway to gold.

The boiling river : adventure and discovery in the Amazon by Andres Ruzo
The Boiling River follows this young explorer as he navigates a tangle of competing interests--local shamans, illegal cattle farmers and loggers, and oil companies. This true account reads like a modern-day adventure, complete with extraordinary characters, captivating plot twists, and jaw-dropping details--including stunning photographs and a never-before-published account about this incredible natural wonder. Ultimately, though, The Boiling River is about a man trying to understand the moral obligation that comes with scientific discovery --to protect a sacred site from misuse, neglect, and even from his own discovery. 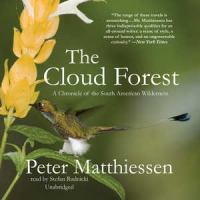 The cloud forest : a chronicle of the South American wilderness by Peter Matthiesen
Peter Matthiessen's report of his expedition crisscrossing 10,000 miles of the South American wilderness, from the Amazon rain forests to Machu Picchu, high in the Andes, down to Tierra del Fuego and back. He followed the trails of old explorers, encountered river bandits, wild tribesmen, and the evidence of ancient ruins, and discovered fossils in the depths of the Peruvian jungle.

The lost city of Z : a tale of deadly obsession in the Amazon by David Grann
In 1925, the legendary British explorer Percy Fawcett ventured into the Amazon jungle, in search of a fabled civilization. He never returned. Over the years countless perished trying to find evidence of his party and the place he called "The Lost City of Z." In this masterpiece of narrative nonfiction, journalist David Grann interweaves the spellbinding stories of Fawcett's quest for "Z" and his own journey into the deadly jungle, as he unravels the greatest exploration mystery of the twentieth century.

The river sea : the Amazon in history, myth, and legend : a story of discovery, exploration, and exploitation by Marshall De Bruhl
Since its discovery by Europeans in 1500, explorers, visionaries, soldiers of fortune, men of God, scientists, and slavers have been drawn to the legendary Amazon. The River Sea is a sweeping chronicle of those brave and hardy souls, ranging from the Spanish seafarer Vicente Pinzón, who discovered the river, to contemporary heroes and heroines, like Sister Dorothy Stang and Chico Mendes, whose efforts to save the rain forest cost them their lives. The River Sea is a compelling account of five centuries of the history, the myths, and the legends of Río Amazonas, the most exotic and fascinating locale on earth.

Tree of rivers : the story of the Amazon by John Hemming
By far the world's largest river, the Amazon flows through the greatest expanse of tropical rain forest on earth. John Hemming's account of the river and its history is full of larger-than-life personalities this unique environment attracted: explorers, missionaries, and naturalists among them. In the last hundred years, the Amazon has seen intrepid explorers, entrepreneurial millionaires, and political extremists taking refuge in jungle retreats. Alongside them, natural scientists, anthropologists, and archaeologists have sought to discover the secrets of this mighty habitat.Today, the world's appetite for timber, beef, and soya is destroying this great tropical forest. Hemming explains why the Amazon is environmentally crucial to survival and brilliantly describes the passionate struggles to exploit and protect it.