Two hundred girls sold ‘tags’ to raise money to fund a Disabled American Veterans of the World War club room. Members of a musical comedy troupe playing at the Lander’s Orpheum Theater also sold tags, one member of the troupe carried a shotgun under her arm as a joke. Others who helped in the project were the Girl Scouts and the Girl Reserves. Local businesses, such as the Electric Theater, the Plummer-Adams Company and the Union National Bank donated spaces for the volunteers. Patton Creamery Company donated many gallons of ice cream for the workers. Also assisting with the drive were several “four-minute men”. This group of volunteers were authorized by President Woodrow Wilson to give four-minute speeches on topics given to them by the Committee on Public Information during WWI, often at movie theaters. Working together the groups sold 7,000 tags and raised $917. 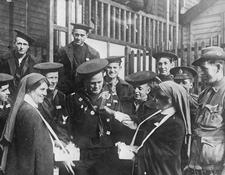 According to the newspaper “Practically everybody was wearing a tag by nightfall”.

Tags were sold for numerous fundraising events including the example in the photo of a sailor buying a tag to raise funds for the British Red Cross during WWI. The photo is courtesy of the Library of Congress.