All Library branches and Library Express West are closed to the public through April 24. Drive-up window service will not be available.

Book drops are locked. You will not be fined for overdue items. 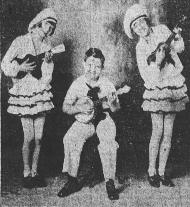 The Tinymite Club was based around a syndicated cartoon/story/coloring page, and was sponsored by the Leader & Press.  The stories were also read on the radio.  The Leader & Press offered several events for club members, including contests, entertainment, and would print the names of club members in the newspaper.  Three thousand Tinymite fans filled the Gillioz for this party in 1928.