All Library branches and Library Express West are closed to the public through April 24. Drive-up window service will not be available.

Book drops are locked. You will not be fined for overdue items.

“Two age-worn diaries handwritten by Carry A. Nation, the hatchet-swinging maverick from Medicine Lodge [Kansas], are in the possession of Carol Erwin, a native of Carroll County, Arkansas, who now lives at Reeds Spring. The diaries cover the years 1907 and 1908.

“’I not only knew Carry Nation, but I slept with her when I was about 12 years old,’ Miss Erwin says.

“’She came and stayed a week with my parents, Mr. and Mrs. W. C. Erwin. My father had befriended her when he was constable of Berryville, and she came to visit us when we moved to a ranch in Oklahoma. I don’t know how long she would have stayed if we hadn’t chased her away. She was driving all of us crazy.’”

“To say that Miss Nation was ‘odd’ is putting it mildly. Her obsession for smashing saloons and lecturing against liquor, tobacco, frilly hats on women and about everything else she chose to label ‘Godless’ was far from the ordinary.

“She admits in her auto-biography, ‘The Life of Carry Nation,’ that a streak of insanity ran in her mother’s side of the family. Her grandmother became insane and reportedly had to be kept behind locked doors for several years.

“Anton S. Booker’s ‘Cary Nation of Kansas,’ in speaking of her father, George Moore, added this insight on the family:

“‘Some of the neighbors said Moore was crazy, but they didn’t really mean it. He was just a violent, eccentric, loud-hollerin’ fella.’

“‘She stalked about in a robe of purple velvet, and wore a crown of brass with big pieces of cut glass in it. When she rode out in her carriage a Negro in a red coat galloped on ahead, blowing a brass trumpet.’

“Carry’s mother forced the driver to wear a high hat and outlandish livery, Booker continues. She went through all this pomp and ceremony because she thought she was Queen Victoria of England.

“This all happened in Cass County, Missouri, and the carryings-on of the Moore family caused a lot of talk, but not half as much as when their daughter, Carry, took over in later years.

“The diaries owned by Carol Erwin tell of Carry’s travels and lectures from Washington, D.C. to Mexico. She tells of being arrested and thrown in the workhouse in Washington, D.C. for a week. The entry made Sept. 18, 1907 says: ‘Went to the House of Detention…arrested for telling men the evils of smoking…’ 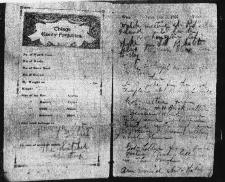 “Carry A. Nation did a lot more than merely smash a few saloons, as evidenced by Carol Erwin’s personal observations the week Carry stayed with her family:
“‘I remember when she got out of the mail hack at our house. She was big, about 6 feet tall, with a wild look in her eyes. For such a large woman her head and face looked too small. She twisted her hair in a knot on top of her head, and wore a long gored skirt with a white shirt waist.

“‘Under a cape she wore on her belt a scabbard in which was her famous hatchet. Attached to the belt was also a large brass chain which was hooked to a big black pocket book.

“’She said she had come to visit awhile, so mother assigned her to my upstairs room and half of my bed. She seemed to like me, and since I was nicknamed ‘Carrie,’ she somehow got the idea that father had named me after her.

“’Our troubles started with her at the first meal and continued night and day for a week. She returned thanks at the table, then started screaming and yelling for God to save the sinners around her. She’d cry, ‘Now, Lord, I hain’t askin’ nothing ‘fer myself, but I come here to my friend’s house and find him a-raisin’ a bunch of heathern[sic] young’uns!’

“’She’d go on and on like this with her eyes closed, screaming at the top of her voice, until she had all of us in the family ready to start screaming, too, including the two cowboys who worked for us.”

“’When we couldn’t stand it any longer, we’d all get up and leave. When she would open her eyes there’d be nobody at the table but her. She never seemed to mind, since she’d do the same thing next meal.

“Carol Erwin said none of their family really wanted to hurt the old lady, but at the end of a week they couldn’t stand it longer.

“With the aid of her father, Carol says she and her brothers rigged up a false Indian raid one night. Mr. Erwin told Carry. ‘You’ve got to stop that screaming and yelling or those Indians will come back and massacre all of us. Maybe I’d better take you to town where you can catch a train back to Eureka Springs where you’ll be safe.

“And that’s the way they got rid of Carry A. Nation, Carol Erwin says. That is how the Erwin family came into possession of the diaries. Carry forgot them, and the Erwins never took the trouble to return them.

“Carol Erwin says she has had the diaries authenticated in Seattle and New York bookstores that deal in old manuscripts and historical relics. Though they did not offer a market for them, one authority suggested that in his opinion they should be worth $2500 from a collector of Carry nation’s personal belongings.”

The caption for the newspaper portrait reads: "This rare picture of Carry Nation, without her hatchet, was taken when she lived in the Ozarks. It was copied from the original photograph owned by Mr. and Mrs. Louis Freund, who also own Hatchet Hall, Mrs. Nation's former home in Eureka Springs, Arkansas."

The caption for the notebook photograph reads: " Here is a close-up of the Carry Nation Diary (1907) owned by Carol Erwin of Reeds Spring. A smaller diary records her day-by-day activities through 1907".