It's All Connected: Ecology, Geography, and Evolution

A crash course on all the the things that affect biodiversity (variety of populations in an ecosystem), including the science of ecology (the study of the interactions of organisms and their environment), evolution (how populations of organisms change over time), and the effects of landscape and geography. A World in One Cubic Foot : Portraits in Biodiversity by David Liittschwager
A photographic close-up of the diversity of life found in one cubic foot across a variety of ecosystems.

American Canopy : Trees, Forests, and the Making of a Nation by Eric Rutkow
In the bestselling tradition of Michael Pollan's Second Nature, this fascinating and unique historical work tells the remarkable story of the relationship between Americans and trees across the entire span of our nation's history.

Darwin Comes to Town : How the Urban Jungle Drives Evolution by Menno Schilthuizen
An evolutionary biologist explains how scientists are discovering that evolution can actually happen very quickly in the most unlikely of places -- the heart of the city.

Humankind : How Biology and Geography Shape Human Diversity by A. H. (Alexander H.) Harcourt
An innovative and illuminating look at how the evolution of the human species has been shaped by the world around us, from anatomy and physiology, to cultural diversity and population density.

Origins : How Earth's History Shaped Human History by Lewis Dartnell
When we talk about human history, we often focus on great leaders, population forces, and decisive wars. But how has the earth itself determined our destiny? Our planet wobbles, driving changes in climate that forced the transition from nomadism to farming. Mountainous terrain led to the development of democracy in Greece. Atmospheric circulation patterns later on shaped the progression of global exploration, colonization, and trade. Even today, voting behavior in the south-east United States ultimately follows the underlying pattern of 75 million-year-old sediments from an ancient sea. Everywhere is the deep imprint of the planetary on the human. From the cultivation of the first crops to the founding of modern states, Origins reveals the breathtaking impact of the earth beneath our feet on the shape of our human civilizations.

The human age : the world shaped by us by 1948- Ackerman
"Humans have subdued 75 percent of the land surface, concocted a wizardry of industrial and medical marvels, strung lights all across the darkness. We tinker with nature at every opportunity; we garden the planet with our preferred species of plants and animals, many of them invasive; and we have even altered the climate, threatening our own extinction. Yet we reckon with our own destructive capabilities in extraordinary acts of hope-filled creativity ... Ackerman [explores] our new reality, introducing us to many of the people and ideas now creating--perhaps saving--our future and that of our fellow creatures"--Amazon.com.

The Monkey's Voyage : How Improbable Journeys Shaped the History of Life by Alan De Queiroz
In The Monkey's Voyage, biologist Alan de Queiroz describes the radical new view of how fragmented distributions came into being: frogs and mammals rode on rafts and icebergs, tiny spiders drifted on storm winds, and plant seeds were carried in the plumage of sea-going birds to create the map of life we see today. In other words, these organisms were not simply constrained by continental fate; they were the makers of their own geographic destiny.

The Serengeti Rules : The Quest to Discover How Life Works and Why It Matters by Sean B Carroll
How does life work? How does nature produce the right numbers of zebras and lions on the African savanna, or fish in the ocean? How do our bodies produce the right numbers of cells in our organs and bloodstream? In [this book] ... Sean Carroll tells the stories of the pioneering scientists who sought the answers to such simple yet profoundly important questions, and shows how their discoveries matter for our health and the health of the planet we depend upon. 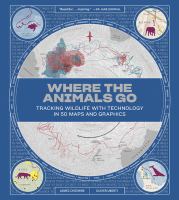 Where the Animals Go : Tracking Wildlife With Technology in 50 Maps and Graphics by James Cheshire
Tracking wildlife with technology in fifty maps and graphics.