Science has had a long history. From the people who have discovered new aspects of our world to those false claims that have led more than one unwary searcher astray, there always seems to be something to learn or relearn. In these books you can find the answers to myths, the names of unsung scientists, and the many building blocks and how they shape our world.

A brief history of everyone who ever lived : the human story retold through our genes by Adam Rutherford
Who are our ancestors? Where did they come from? Geneticists have suddenly become historians, and the hard evidence in our DNA has blown the lid off what we thought we knew. Acclaimed science writer Adam Rutherford explains exactly how genomics is completely rewriting the human story--from 100,000 years ago to the present. A Brief History of Everyone Who Ever Lived will upend your thinking on Neanderthals, evolution, royalty, race, and even redheads. (For example, we now know that at least four human species once roamed the earth.) Plus, here is the remarkable, controversial story of how our genes made their way to the Americas--one that's still being written, as ever more of us have our DNA sequenced. 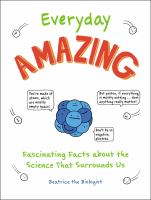 Everyday amazing : fascinating facts about the science that surrounds us by Katie McKissick
Beatrice the Biologist is an easily amused former high school biology teacher with a soft spot for the mind-blowing science we encounter daily that we often take for granted. In Everyday Amazing, she shines the spotlight on ten different types of amazing everyday scientific facts in short chapters full of fun and fascinating tidbits bound to both entertain you and expand your horizons! Learn the basics of atomic science, sound waves, bioscience, microbiology, and more in accessible chapters offering a fresh perspective on concepts you may have learned about, but aren't totally clear on.

Gene machine : the race to decipher the secrets of the ribosome by Venki Ramakrishnan
Everyone has heard of DNA. But by itself, DNA is just an inert blueprint for life. It is the ribosome--an enormous molecular machine made up of a million atoms--that makes DNA come to life, turning our genetic code into proteins and therefore into us. Gene Machine is an insider account of the race for the structure of the ribosome, a fundamental discovery that both advances our knowledge of all life and could lead to the development of better antibiotics against life-threatening diseases.

Headstrong : 52 women who changed science--and the world by Rachel Swaby
Headstrong delivers a powerful and entertaining response to the question- Who are the role models for today's female scientists? Covering Nobel Prize winners and major innovators, as well as lesser-known but hugely significant scientists who influence our every day, these engaging profiles span centuries of courageous thinkers and illustrate how each subject's ideas developed, from their first moment of engagement with science through the research and discovery for which they're best known. Finally, it gives these 52 lives the attention and respect they deserve--with the aim to encourage and inspire a new generation of girls to put on their lab coats.

Ingredients: The Strange Chemistry of What We Put in Us and on Us by George Zaidan
Zaidan, an MIT-trained chemist who cohosted CNBC's hit Make Me a Millionaire Inventor and wrote and voiced several TED-Ed viral videos, makes chemistry more fun than Hogwarts as he reveals exactly what science can (and can't) tell us about the packaged ingredients sold to us every day. Sugar, spinach, formaldehyde, cyanide, the ingredients of life and death, and how we know if something is good or bad for us--as well as the genius of aphids and their butts--are all discussed in exquisite detail at breakneck speed

Life's engines : how microbes made Earth habitable by Paul G. Falkowski
For almost four billion years, microbes had the primordial oceans all to themselves. The stewards of Earth, these organisms transformed the chemistry of our planet to make it habitable for plants, animals, and us. Life's Engines takes readers deep into the microscopic world to explore how these marvelous creatures made life on Earth possible--and how human life today would cease to exist without them.

Monkeys, myths and molecules : separating fact from fiction in the science of everyday life by Dr. Joe Schwarcz
The Internet is a powerful beast when it comes to science; the answer to any query you may have is just a few keystrokes away. But when there are multiple answers from various sources, how can we know what information is reliable? In "Monkeys, Myths and Molecules," bestselling author Dr. Joe Schwarcz takes a critical look at how facts are misconstrued in the media. Unafraid to expose the sheer nonsense people are led to believe about health, food, drugs, and our environment, Dr. Joe confronts pseudoscience and, convincingly and entertainingly, advocates for a scientific approach to the everyday.

Newton's apple and other myths about science by Ronald L. Numbers and Kostas Kampourakis
A falling apple inspired Isaac Newton's insight into the law of gravity--or so the story goes. Is it true? Perhaps not. But the more intriguing question is why such stories endure as explanations of how science happens. Newton's Apple and Other Myths about Science brushes away popular misconceptions to provide a clearer picture of great scientific breakthroughs from ancient times to the present.

Stories of the invisible : a guided tour of molecules by Philip Ball
What are things made of? Philip Ball shows that the world of the molecule is indeed a dynamic place. Using the chemistry of life as a springboard, he provides a new perspective on modern chemical science as a whole. Living cells are full of molecules in motion, communication, cooperation, and competition. Molecular scientists are now starting to capture the same dynamism in synthetic molecular systems, promising to reinvent chemistry as the central creative science of the new century.

Symphony in C : carbon and the evolution of (almost) everything by Robert M. Hazen
Carbon is everywhere: in the paper of this book and the blood of our bodies. We live on a carbon planet, and we are carbon life. No other element is so central to our well-being; yet, when missing or misaligned, carbon atoms can also bring about disease and even death. At once ubiquitous and mysterious, carbon holds the answers to some of humanity's biggest questions. Where did Earth come from? What will ultimately become of it--and of us? With poetic storytelling, earth scientist Robert M. Hazen explores the universe to discover the past, present, and future of life's most essential element. 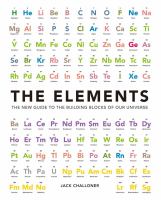 The lost elements : the Periodic Table's shadow side by and Mary Virginia Orna Marco Fontani
Throughout its formation, the periodic table has seen false entries, good-faith errors, retractions, and dead ends; in fact, there have been more elemental "discoveries" that have proven false than there are current elements on the table. The Lost Elements: The Shadow Side of Discovery collects the most notable of these instances, stretching from the nineteenth century to the present. The book tells the story of how scientists have come to understand elements, by discussing the failed theories and false discoveries that shaped the path of scientific progress.

The poison squad : one chemist's single-minded crusade for food safety at the turn of the twentieth century by Deborah Blum
Dr. Harvey Washington Wiley set out to ensure food safety. He selected food tasters to test various food additives and preservatives, letting them know that the substances could be harmful or deadly. The tasters were recognized for their courage, and became known as the poison squad.

What the future looks like : scientists predict the next great discoveries and reveal how today's breakthroughs are shaping our world by Jim Al-Khalili
Every day, scientists conduct pioneering experiments with the potential to transform how we live. Yet it isn't every day you hear from the scientists themselves! Now, award-winning author Jim Al-Khalili and his team of top-notch experts explain how today's earthshaking discoveries will shape our world tomorrow--and beyond. Will we find a cure to all diseases? The answer to climate change? And will bionics one day turn us into superheroes? The scientists in these pages are interested only in the truth--reality-based and speculation-free. The future they conjure is by turns tantalizing and sobering: There's plenty to look forward to, but also plenty to dread. And undoubtedly the best way to for us to face tomorrow's greatest challenges is to learn what the future looks like--today.