It's the start of the spookiest month, but that doesn't mean we have to be afraid! Check out these titles that explore creepy, mysterious, and potentially frightening subject matter and explains them all using science!

A Crack in Creation : Gene Editing and the Unthinkable Power to Control Evolution by Jennifer A Doudna
Two Berkeley scientists explore the potential of a revolutionary genetics technology capable of easily and affordably manipulating DNA in human embryos to prevent specific diseases, addressing key concerns about related ethical and societal repercussions. 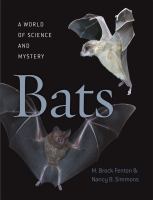 Bats : A World of Science and Mystery by M. Brock (Melville Brockett) Fenton
Drawing heavily on their own fieldwork and research interests, Fenton (Univ. of Western Ontario) and Simmons (American Museum of Natural History) provide a wealth of information about the biology and natural history of bats.

Lone Survivors: How We Came to be the Only Humans on Earth by Chris Stringer
In this groundbreaking and engaging work, world-renowned paleoanthropologist Stringer sets out a new theory of humanity's origin, offering the definitive account of who and what we were, and a work that will change perceptions about our origins and about what it means to be human.

Manual for Survival : A Chernobyl Guide to the Future by Kate (Kathryn L.) Brown
A chilling exposé of the international effort to minimize the health and environmental consequences of nuclear radiation in the wake of Chernobyl.

Resurrection Science : Conservation, De-Extinction and the Precarious Future of Wild Things by M. R. O'Connor
A tour of current advances in biology and ethics demonstrates how humans are increasingly in control of evolution, exploring how as the scientific community endeavors to save near-extinct species, the creatures being saved become less wild and more dependent.

Shocked: Adventures in Bringing Back the Recently Dead by David Casarett
Not too long ago, when you were dead, you were dead. There was no coming back. But a little electricity, applied to the heart in just the right way, has changed all that. Now death has become just another serious complication. Dr. David Casarett, a ... researcher and professor of medicine, now chronicles his journey to the cutting edge of resuscitation

Skeleton Keys : The Secret Life of Bone by Brian Switek
In this natural and cultural history of bone, Brian Switek explains where our skeletons came from, what they do inside us, and what others can learn about us when these wondrous assemblies of mineral and protein are all we've left behind. He makes a compelling case for getting better acquainted with our skeletons, in all their surprising roles.

Stiff: the Curious Lives of Human Cadavers by Mary Roach
Stiff is an oddly compelling, often hilarious exploration of the strange lives of our bodies postmortem. For two thousand years, cadavers--some willingly, some unwittingly--have been involved in science's boldest strides and weirdest undertakings. In this fascinating account, Mary Roach visits the good deeds of cadavers over the centuries and tells the engrossing story of our bodies when we are no longer with them.

The Butchering Art : Joseph Lister's Quest to Transform the Grisly World of Victorian Medicine by Lindsey Fitzharris
A dramatic account of how 19th-century Quaker surgeon Joseph Lister developed an antiseptic method that indelibly changed medicine, describes the practices and risks of early operating theaters as well as the belief systems of Lister's contemporaries.

The Eternal Darkness : A Personal History of Deep-Sea Exploration by Robert D Ballard
The man who discovered the wreck of the Titanic looks back on a career spent looking for sunken ships and exploring volcanic cracks in the ocean floor to confirm the theory of plate tectonics.

The Nature of Life and Death : Every Body Leaves a Trace by Patricia E. J Wiltshire
From mud tracks on a quiet country road to dirt specks on the soles of walking boots, forensic ecologist Patricia Wiltshire uses her decades of scientific expertise to find often-overlooked clues left behind by criminal activity. Along the way, she introduces us to the unseen world all around us and underneath our feet: plants, animals, pollen, spores, fungi, and microbes that we move through every day. Her story is a testament to the power of persistence and reveals how our relationship with the vast natural world reaches far deeper than we might think.

The poison squad : One Chemist's Single-Minded Crusade for Food Safety at the Turn of the Twentieth Century by Deborah Blum
Dr. Harvey Washington Wiley set out to ensure food safety. He selected food tasters to test various food additives and preservatives, letting them know that the substances could be harmful or deadly. The tasters were recognized for their courage, and became known as the poison squad.

The Secret Lives of Bats : My Adventures With the World's Most Misunderstood Mammals by Merlin D Tuttle
Enamored of bats ever since discovering a colony in a cave as a boy, Tuttle realized how sophisticated and intelligent bats are.

The Wasp that Brainwashed the Caterpillar by Matt Simon
A fascinating exploration of the awe-inspiring, unsettling ingenuity of evolution.

This Is Your Brain on Parasites : How Tiny Creatures Manipulate Our Behavior and Shape Society by Kathleen McAuliffe
An expansion of a popular Atlantic article investigates the world of microbes and the myriad ways they control how other creatures - including humans - act, feel, and think.

Working Stiff : Two Years, 262 Bodies, and the Making of a Medical Examiner by Judy Melinek
The fearless memoir of a young forensic pathologist's rookie season as a NYC medical examiner, and the cases--hair-raising and heartbreaking and impossibly complex--that shaped her as both a physician and a mother.