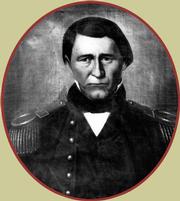 Death of Col. Boone
"We take the following from the Springfield Advertiser of the 12th inst. [this month]

"Col. Nathan Boone, youngest son of Daniel Boone, died on Friday last, at his residence in this county, aged 76 years.

"He made several expeditions to the head of the Arkansas river and upon the plains, during his military services.   He was anxious to enter service during the Mexican War, but on account of his age, he was kept at his old post.

"His life has been one of usefulness and true devotion to his country; and while we regret his loss as a friend, a citizen, and a patriot, we are thankful that such men did live, and participate in the struggles of our country, at a time when their services were needed."