Alzheimer’s and Brain Awareness Month is celebrated during the month of June. It’s a time to go purple, the official color of the Alzheimer's movement, and show support for the millions of people living with Alzheimer’s or dementia and their care partners, who offer unwavering support.

Alzheimer’s can have a big impact on every member of the family, including children. Each child will react differently to someone who has the disease. The Alzheimer’s Association and Mayo Clinic offer information to help parents or care givers talk with children and teens to understand the disease.

Books for children and young adults about Alzheimer’s disease: 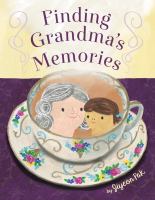 A little girl helps her grandma with her memory. 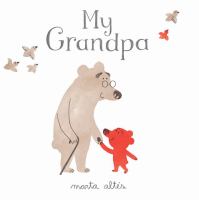 My Grandpa by Marta Altes

An elderly grandfather bear and his adoring grandson share a special relationship. 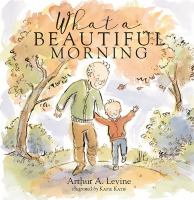 What a Beautiful Morning by Arthur A. Levine

When his grandpa seems to have forgotten how to do the things that they love, Noah's grandma steps in, while Noah tries to find something he can share with his grandpa. 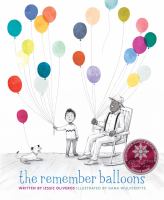 The Remember Balloons by Jessie Oliveros

James has a bunch of balloons, each of which holds a special memory, but as his grandfather ages and loses his own balloons, James discovers that he is gaining new ones.

When his mother's illness forces her to move into a nursing home, Nick retreats into his video game, where he meets another gamer who Nick suspects may be his mother.

All That's Missing by Sarah Sullivan

Secretly providing for himself and a beloved grandfather who is succumbing to dementia, young Arlo is placed in the care of a social worker and runs away to find and connect with his only other family member.

Saturdays with Hitchcock by Ellen Wittlinger

Twelve-year-old Maisie feels that she has enough complications in her life: her actor uncle has moved in with her family while he recovers from an accident and her father is not pleased, her grandmother is slipping into dementia but wants to remarry, her mom has been laid off, and her best friend Cyrus, with whom she spends Saturdays watching classic movies, has revealed that he is gay--but Gary, the boy he has a crush on, seems more attracted to Maisie herself.

Set in the 1980s, exploring the relationship between a 12 year boy "Jack" and his relationship with his Grandpa. Grandpa's memory is slipping. He often mistakes Jack for his WWII squadron leader. Jack's parents have sent Grandpa to a boring rest home, he wants to escape. Will Jack help him?

Hour of the Bees by Lindsay Eager

At first, twelve-year-old Carol is not happy to be spending the summer helping her parents move her grandfather to an assisted living home, but as the summer wears on, she finds herself drawn to him, fascinated by his amazing stories.

How Not to Disappear by Clare Furniss

In England, newly pregnant seventeen-year-old Hattie and her gin-drinking great-aunt Gloria, who is in the early stages of dementia, set out together on a road trip of self-discovery--Gloria to finally confront the secrets of her past before they are wiped from her memory forever and Hattie to face the hard choices that will determine her future.

Springing his grandfather from an assisted-living facility, Hendrix teams up with Corrina, a fellow teen who is chafing under the rules of her oppressive adoptive parents, in an effort to bring his grandfather to the site of his first kiss before he loses the rest of his memory to Alzheimer's.

The Fixer by Jennifer Lynn Barnes

When her grandfather develops dementia, sixteen-year-old Tess, who has been keeping his Montana ranch going, is whisked away to Washington, D.C., by a sister she barely knows and thrown into a world of politics, power, wealth, love triangles, and family secrets.