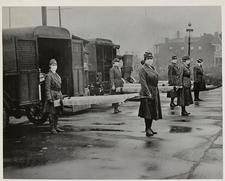 According to the Centers for Disease Control and Prevention, an estimated 500 million people or one-third of the world’s population became infected with the virus, with at least 50 million deaths worldwide and approximately 675,000 deaths in the United States, including 2,300 in Kansas City.

In Kirksville, Vice President of the American School of Osteopathy, Dr. George Still M.D., D.O., took charge of handling influenza cases and the steps to prevent its spread. He was unwavering in limiting visitation as well as isolating patients and staff that showed symptoms of flu. Patients were either isolated at home or in the contagious hospital, which was a separate building from the regular hospital. Doctors and attendants in the contagious hospital were not allowed to mix with those in the surgical hospital.

St. Louis was extremely effective with mitigating the spread of influenza. Dr. Max Starkloff, health commissioner for the city of St. Louis, monitored influenza news and its spread across the country. He communicated preventative steps and health best practices to the people of St. Louis before the influenza reached the city. The city banned all public gatherings, closed schools, movie theaters, bars, and other places of public gathering and entertainment.

Individuals were encouraged to employee self-isolation as the city enacted a wide-spread closure. Volunteers joined the local chapter of the Red Cross to provide nursing assistance, distribution of linens, and supply community kitchens with food and other supplies. Volunteers joined the Red Cross motor crops as drivers and provided their own automobiles to support ambulances and chauffeur nurses. Because of its leadership and decisive actions, St. Louis experienced one of the lowest influenza death rates in the nation.

In October 1918, Springfield also enacted a city wide closure and public gathering ban. The Springfield Public Library completely closed and fumigated its building, the now Midtown Carnegie Library Branch. The Library remained completely closed until November 4, 1918. On that Monday, only the circulation department reopened. The reading rooms and other public gathering areas remained closed to the public. Books could be returned and others could be checked out for reading at home only. All fines that occurred during the closure period were waved as long as the overdue books were returned by November 7. Any of the books returned were also fumigated before being placed back on the shelves for others to check out.

This article originally appeared in the Springfield News-Leader, March 30, 2020. For more information see influenzaarchive.org and  cdc.gov. The image above is the American Red Cross Motor Corps of St. Louis, October 1918. The image is courtesy of the Library of Congress. For more resources on Missouri’s response to the 1918 Influenza Pandemic see the letters, diaries, and other materials available at missourioverthere.org.