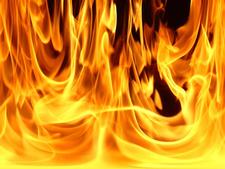 printed August 18, 1898, reported in great detail that half of the south side of the Ava Public Square burned. Around midnight of August 15, 1898, four frame buildings and most of the contents were consumed by fire in just one hour. The fire started in the Johnson Building where Luther Story kept his goods and lived above his store. Mr. R.H. Thrasher was able to rouse him from sleep but he was badly cut while breaking a window to escape.

Mr. and Mrs. Thrasher and sons Walter and Dan, next tried to save their restaurant next door but it became apparent that the building was doomed. Men called to the fire by the ringing of a dinner bell by Else Fulkomer began helping to carry Mr. Thrashers household goods out. As more men arrived, others began trying to keep the fire from spreading. Men on top of the Murray Building and the Nash buildings, were passed buckets of water and prevented the fire from spreading further. The courthouse and some of the frame buildings on the north side of the square were also given this treatment.

In the end the first building west of Dr. Murray’s drug store, which belonged to Marion Lumpkins and contained his barber shop, was destroyed. The next building to burn belonged to Sheriff Johnson and occupied by Luther Story’s dry goods and groceries, then Mr. Thrashers bakery and restaurant and the last building to burn was owned by W.F. Beaman and was occupied down stairs by Mr. Jones, a barber, and the upstairs living area was occupied by Lee Lumpkins.

The newspaper credits the firefighters, which included Will Miller, John Singleton, Bud Coleman, Paul Coleman, Everett Davis, and others with controlling the flames. It was also believed that since it was a very still night, the heat carried the sparks and pieces of burning shingles so high that they were mostly burned out by the time they came down.

The newspaper also speculated that the fire was set on purpose. A Mrs. Pennington said she saw a man going east past her house in the opposite direction of the other men running toward the fire. Joe Sell said he passed a man walking north very fast. Apparently, many things that were taken out of the buildings disappeared. The paper also suggested that “firebugs” be given a horsewhipping and he, she, or they be given 20 to 25 years in the penitentiary.