On March 16, 2021, eight people were killed, including six Asian American women, in an Atlanta, Georgia spa mass shooting. This tragedy highlighted the increased racism and discrimination against Asian Americans in America over the past year. To educate yourself on Asian American history, experiences, and writings try one or all of these books.

"Asian Americans inhabit a purgatorial status: neither white enough nor black enough, unmentioned in most conversations about racial identity. In the popular imagination, Asian Americans are all high-achieving professionals. But in reality, this is the most economically divided group in the country, a tenuous alliance of people with roots from South Asia to East Asia to the Pacific Islands, from tech millionaires to service industry laborers ... Poet and essayist Cathy Park Hong ... confronts this thorny subject, blending memoir, cultural criticism, and history to expose the truth of racialized consciousness in America"

The Sympathizer by Viet Thanh Nguyen

The winner of the Pulitzer Prize for Fiction, as well as seven other awards, The Sympathizer is one of the most acclaimed books of the twenty-first century. With the pace and suspense of a thriller and prose that has been compared to Graham Greene and Vladimir Nabokov, The Sympathizer is a sweeping epic of love and betrayal. The narrator, a communist double agent, is a “man of two minds,” a half-French, half-Vietnamese army captain who comes to America after the Fall of Saigon, and while building a new life with other Vietnamese refugees in Los Angeles is secretly reporting back to his communist superiors in Vietnam. The Sympathizer is a blistering exploration of identity and America, a gripping spy novel, and a powerful story of love and friendship.

Richly told and profoundly moving, Pachinko is a story of love, sacrifice, ambition, and loyalty. From bustling street markets to the halls of Japan's finest universities to the pachinko parlors of the criminal underworld, Lee's complex and passionate characters--strong, stubborn women, devoted sisters and sons, fathers shaken by moral crisis--survive and thrive against the indifferent arc of history.

The Making of Asian America: a History by Erika Lee

The Making of Asian America shows how generations of Asian immigrants and their American-born descendants have made and remade Asian American life, from sailors who came on the first trans-Pacific ships in the 1500 to the Japanese Americans incarcerated during World War II. Over the past fifty years, a new Asian America has emerged out of community activism and the arrival of new immigrants and refugees. No longer a “despised minority,” Asian Americans are now held up as America’s “model minorities” in ways that reveal the complicated role that race still plays in the United States. 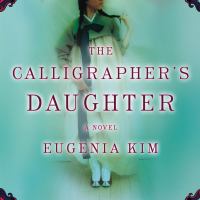 The Calligrapher's Daughter by Eugenia Kim

In early-twentieth-century Korea, Najin Han, the privileged daughter of a calligrapher, longs to choose her own destiny. Smart and headstrong, she is encouraged by her mother--but her stern father is determined to maintain tradition, especially as the Japanese steadily gain control of his beloved country.

A Tale for the Time Being by Ruth Ozeki

In Tokyo, 16-year-old Nao has decided there's only one escape from her aching loneliness and her classmates' bullying. But before she ends it all, Nao first plans to document the life of her great-grandmother, a Buddhist nun who's lived more than a century.

Full of Ozeki’s signature humor and deeply engaged with the relationship between writer and reader, past and present, fact and fiction, quantum physics, history, and myth, A Tale, for the Time Being, is a brilliantly inventive, beguiling story of our shared humanity and the search for home.

A young woman named Aomame follows a taxi driver's enigmatic suggestion and begins to notice puzzling discrepancies in the world around her. She has entered, she realizes, a parallel existence, which she calls 1Q84 - "Q" is for "question mark". A world that bears a question.

A love story, a mystery, a fantasy, a novel of self-discovery, a dystopia to rival George Orwell's, 1Q84 is Haruki Murakami's most ambitious undertaking yet: an instant bestseller in his native Japan, and a tremendous feat of imagination from one of our most revered contemporary writers.

We Gon' Be Alright: Notes on Race and Resegregation by Jeff Chang

In these provocative, powerful essays acclaimed writer/journalist Jeff Chang (Can’t Stop Won’t Stop, Who We Be) takes an incisive and wide-ranging look at the recent tragedies and widespread protests that have shaken the country. Through deep reporting with key activists and thinkers, passionately personal writing, and distinguished cultural criticism, We Gon’ Be Alright links #BlackLivesMatter to #OscarsSoWhite, Ferguson to Washington D.C., the Great Migration to resurgent nativism. Chang explores the rise and fall of the idea of “diversity,” the roots of student protest, changing ideas about Asian Americanness, and the impact of a century of racial separation in housing. He argues that resegregation is the unexamined condition of our time, the undoing of which is key to moving the nation forward to racial justice and cultural equity.