Summer Camps in the Ozarks 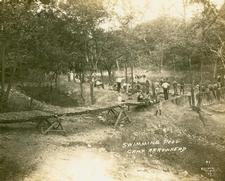 Many Camps Open in Ozarks Region

"Vacation camps for boys and girls are opening in all sections of the Ozarks playgrounds region and enrollment has been large.

"Joyzelle Camp for girls opened last week at Monte Ne, Ark., near Rogers, under direction of Miss Iris Armstrong of Little Rock. Eight states were represented in the first group of students.

"‘K’ camps at Branson, directed by Mr. and Mrs. C.L. Ford of Dallas, Texas, opened last month and will continue until August 10. This is the eighth season for Kickapoo Kamp for girls and the sixth season for Kuggaho Kamp for boys. Seventy boys and girls are enrolled for the two camps.

"Burg School of Music at Ozark Colony, Sulphur Springs, will begin its annual session this week, under direction of Professor Clarence Burg of the fine arts department of Oklahoma City University.

"Camp Markham near Fayetteville, Gypsy Camp near Siloam Springs and Camp Leale at Taneycomo also are conducting their usual programs of outdoor and educational activities."

The image, from the Springfield-Greene County Library archive, is of Camp Arrowhead Boy Scout Camp in Webster County, dated 1927.