All Library branches will be closed and the Mobile Library will not make its scheduled stops on Monday, December 6, for staff training. 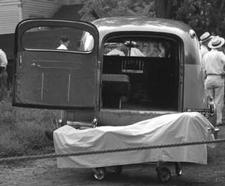 Unsolved Murders in the Springfield Area

“Several mysterious murders have been committed in Springfield and immediate vicinity, the first 40 years ago and the most recent about five years ago. All have passed into the ‘unsolved’ index with officers admittedly baffled and the possibility remote that the guilty persons ever will be captured.

“Officers were not easily discouraged. They worked for years on some of the cases, making it a special point to question every man arrested for murder about some of the previous crimes but gained no results.

“The majority of these murders were committed before the age of the telephone, telegraph, radio and high powered cars. Imperfect communication was in favor of the fugitive criminals in making good their escape.

“A few years ago, A. J. Siegfried of Kansas City, was killed in his room at a hotel. A jewelry salesman, it was thought that he was a victim of robbery. A woman [traveling with him?] implicated a transient man but the man disappeared.

“Ten years ago Ben Benzonia, a young teamster, was slain. He did hauling work in various parts of the city. Benzonia was hired by an unknown person to haul furniture from the country to the city. The teamster was found several weeks later near Mount Vernon with a bullet through the head. His horses and wagon were never found.

“About fifteen years ago, Tom Creson, 65, a hermit, was killed while he was walking home from Springfield one night. He had been shot in the head.

“One of the more recent murders was Art Shackleford, 28, who was shot in the back of the head. His body was found in a ditch next to the bypass from Galloway to the Campbell Avenue Road. Two theories advanced was that Shackleford was murdered by enemies and taken/driven to the lonely spot while others believed he had been ‘taken for a ride’.

“About fifteen years ago ‘Daddy’ Gardner, a Campbell Avenue Grocer, was wounded fatally in his store in a robbery which occurred on a Sunday night. He evidently was shot and killed when he resisted the holdup men. According to witnesses, two men were seen to enter the store but the description of them was not complete.

“Eight years ago an unidentified man was found dead alongside the Frisco railroad tracks. His throat had been slashed with a razor. Two theories as to how he was killed were advanced. One was that he had been slain by hoboes and thrown from a passing freight train and another was that he was murdered elsewhere in the city and then placed on the railroad tracks. A picture of the corpse was taken and sent to various parts of the US in the hope that someone who knew him would get in touch with the local police department. Nothing ever resulted from this.

“About nine years ago, Charles Jeffries, 30, was found dead near Hammond’s Ice House. He had been shot. No enemies were known and no clues were found that led to his murderers.

“Thirty years ago, T. M. Kinney, a widely known tailor, was shot just as he prepared to enter his home on St. Louis Street. Nearly everyone in Springfield knew Mr. Kinney, veteran police officers declare. He was popular and they can offer no reason whatsoever for his murder.

“About thirty years ago, T. Roark, a veteran of the Civil War and a pensioner, was killed on Drury College campus. He was shot through the head while taking a short cut across the school grounds to his home. At that time there had been a number of minor robberies in Springfield and police believed that one of the robbers held up Roark and, not finding any money on him, killed him in disgust.

“Twenty-five years ago Elvin Spencer was stabbed in a dance hall on Grant Avenue between Phelps and Pine during a free for all fight. He ran from the dance hall south on Grant about a block and finally, weakened by loss of blood, fell in the gutter and died. Every person in that dance hall was taken to police headquarters and questioned at length. It seems, officers say, that nearly everyone at the dance was intoxicated and did not remember seeing Spencer stabbed.

“In 1880-81, George Washington, a Negro, was found shot in a cave at Cave springs. The bullet entered his head directly between the eyes and was later removed from the brain at an autopsy. The reason for his slaying never was learned nor were any suspects ever arrested.

“Twenty years ago George Slatten was found stabbed to death in a barn on his farm home near Walnut Grove. A few bloody tracks were found leading away from the barn. Slatten’s relatives and a hired hand submitted to a foot examination, but officers were positively convinced that none of them could have committed the crime.

“Three Negroes were also lynched on the public square of Springfield in the early morning hours of Easter Sunday, 1906, but no one ever was convicted of the crime.

“Forty years ago, ‘Boss’ Edwards, leader of a gang of horse thieves at Ozark, was lynched by a mob. In broad daylight he was dragged from the jail and strung up by 15 men who termed themselves Regulators. An intensive investigation into the murder was conducted, but the guilty ones were not revealed.

“About ten years ago a taxi driver of Buffalo, name unknown, was shot and killed a short distance from Springfield. He left Buffalo with two men early one morning and was not heard of until his body was found with a .22 calibre bullet wound in his head. The taxi was standing in the road.

“About twenty years ago Judge James A. Frink, 50, former police and probate judge, was shot down from an alley in the neighborhood of the Rock Castle apartment building. Popular opinion thought he was killed by a criminal he had sentenced while others believed he had shot himself and still others contended that he had been robbed and then shot. The first two were discredited as no gun was found at the scene and the Judge was not known to carry large sums of cash.”

Want to research these murders yourself? Newspaper articles can be found in the Springfield newspapers at Newspapers.com.