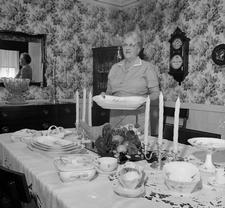 “Enthusiastic, peppy, and fun to be with... Mrs. Claud Rathbone is especially interesting when she’s getting ready for company. A few days ago, just before a turkey dinner for a group of friends, there was lots of activity in the spacious Rathbone home at 1530 Washington [Avenue], as the hostess assembled pieces of a beautiful set of Haviland [china] dating back over a century.

“The china was purchased originally by Mrs. Rathbone’s great grandfather, E.J. Keet, on a trip to New York. Needless to say, his bride must have been delighted when the shipment arrived and she unwrapped the extensive set including five platters of varying size, painted by hand with the most delicate flowers of pale blue, rose and pink, and etched with green leaves.

“Though the set appears to be fragile, it’s proven to be quite durable. ‘I love to use the dishes,’ Mrs. Rathbone smiled, ‘and I do, without hesitation, anytime I wish. It seems a pity not to have the enjoyment of using the things you especially like.’

“There are lots of other pretty things in Mr. and Mrs. Rathbones’s home, and the breakfront is filled with unusual appointments for the table; many with histories of story book quality.

“Mrs. Rathbone has made intricate needlepoint for her dining room chairs. Her favorite hobby has inspired other needlepoint adding to the decor of the living room. The Rathbones have a genuine love of entertaining which, of course, is the prime requirement for a successful party.

“Most of Mrs. Rathbone’s good cooking is done well in advance of the hour when guests are expected. By the day before the turkey dinner, the table was arranged and much of the preparation had been completed. In the pantry a large pan held cubes of bread for the dressing. But there was more than just bread. ‘If I have stale biscuits in the house I put them in too,’ Mrs. Rathbone laughed, ‘and I think crackers give it a flavor that nothing else does.’

"'We have several holiday dishes which are traditional with our family,’ Mrs. Rathbone said.”

Note: For a time, the Springfield Leader & Press would feature local cooks in a series called the Culinary Corner. These articles would profile a person and highlight the special meal the cook was preparing by publishing several recipes for the readers.

This and other yummy recipes from old newspapers can be found on Newspapers.com  The photograph is courtesy of the News Leader.