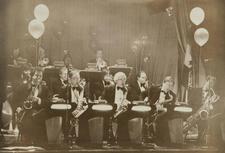 The first Springfield Symphony’s Big Band Bash on New Year’s Eve was a success, according to symphony director Charles Bontrager. The dance was a fundraising event and they sold about 150 tickets. The cost was $100.00 per couple for the evening that included an open bar, snacks, party favors and a full buffet breakfast served after midnight.

“Bontrager said the New Year’s Eve event was also a way to demonstrate the versatility of the symphony. ‘Of the 17 men in the band, 14 of them are from the symphony,’ he said."