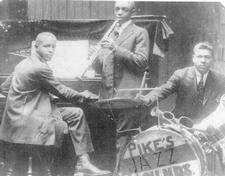 Ray Eldon Pike, a popular musician in the Springfield area, died in an automobile accident in 1932. Here are two of his obituaries and pictures of his bands.

"Funeral arrangements for Ray Eldon Pike, 34, killed Saturday evening on his way to Osceola to fish, when the car he was in turned in the loose gravel and fell down an embankment, are incomplete awaiting arrival of kinsfolk.

"Young Pike, son of Henderson Pike, Negro Republican leader, was a popular musician, and leader of Pike's Jazz Band. He lived with his father and two sisters at 706 Washington Avenue. He is survived by his father, two brothers, Earl Pike of Oklahoma City and Emmett Pike of Springfield, and the following sister, Mrs. Della Hartley of Tulsa, Okla.; Mrs. Retta Stroud of Centralia, Okla.; Mrs. Irene Abernathy and Mrs. Mary Bond, of the home address; Mrs. Juanita Rooker of Miami, Fla., and Mrs. Beatrice McCowan, of Kansas City.

"Ray Pike was a member of the Norval Strafford Post of the American Legion, and his funeral will be under Legion auspices, and the direction of the Campbell Undertaking Company."  Leader, May 16, 1932

"Funeral services for Ray Eldon Pike, 34, popular negro orchestra leader who died Saturday night from injuries in an automobile accident near Osceola, were to be held in the Gibson Chapel Presbyterian Church at 2 o’clock this afternoon, with the Reverend M.S. Smith officiating and the Reverend L.M. Clark assisting. Norval Stafford post of the American Legion will conduct a 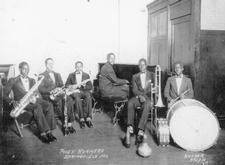 service at the grave. Burial will be at Cave Spring, under the direction of the Campbell Undertaking Company.

"Ray Pike was the son of Henderson Pike, widely known Republican and an influential member of his race here. The fatal accident occurred as the young man and a group of friends were on their way to Osceola for a week-end fishing trip."  Leader May 19, 1932.

The photographs of Pike's bands are from Black Families of the Ozarks. His military photograph is from Missouri Over There.