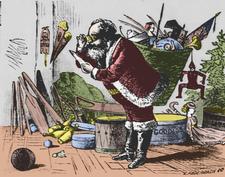 "Christmas evening. I was seated before the fire, memories of the past crowding in my mind, on the mantle before me is a postcard with the old Hodge Hollow home on it, so naturally sketched by Herbert. The fire burns brightly, I am weary in body from a strenuous weeks work, my eyes are drawn to the postcard, reclining and relaxing in a large comfortable chair I dozed; In my dream I was back again a small timid freckled face boy, t'was Christmas morn, I awoke 'boys Santa Clause has sure been here again', there on the floor over by the window was seven small tin plates, in each some candy, some candy hearts and small candy animals and oh looky he brought Bob some galloses, Noah a harp, Will a pair of gloves, Earl a cap, Virgie somethin, and Herbert a horn, we were all so very happy and Santa Clause was so real to us, but Geo and Chas are not quite so enthused about Santa.

"The girls and their families will all be here today to eat a good dinner with us and maybe stay all night.

"Ma and Pa come in and watch us and we are all so very happy because we weren't sure that Old Santa knew where to find us since we had moved to Missouri; then Ma said tonight the Johnson kids are coming over and we will make popcorn balls. We were overjoyed two good nights right together, last night at Swan we had such a dandy time at the Christmas tree, some of the drunk boys made a good deal of noise but Mr. Brunstetter tried to quiet them but they wouldn't quiet. Herbert couldn't go because he was too small. Bess woke Vergie up and she rubbed her eyes and said a speech, something like this 'Golden hair climbed on Grandpa's knee…'

"I awoke, twilight had fallen, the fire burned low, in vain I tried to go back to sleep, but my dream was over; then I realized that two score years had passed since the dream began and I was back in a rush and hurry world. I closed my eyes long enough to thank the giver of dreams for the sweet memories of Hodge Hollow and good parents who probably never were fully appreciated while living, and hope that again on these future occasions that the great spirit of dreams may take me back until we finally realize our dreams in a new and perfect world, that we have promised, with those whom we have loved and lost for a while."

From Noah Burger's personal notebook, loaned to the library by Bob Piland.

Noah Burger's parents were George and Mary, both born in Germany according to the 1900 census. The 1910 census states that they came to the U.S. in the 1850's. Noah was born around 1882 in Illinois. His brothers and sisters were also born in Illinois, except the youngest, Herbert, who was born in Missouri around 1893. Mr. Burger died in 1974 and is buried in the Sparta Cemetery with his wife Eva.