From the Bias magazine May 25, 1954, page 12.
Last Run.  Long time ago, Frisco tradition has it, an impatient traveler (Kansas City to Springfield) on a hot summer day grew weary of the frequent stopping of a friendly little train.  Dismounting at the station here, he observed to one of the crew that the line he'd just travelled was "high, dry and dusty" and that moment, the "High Line" received its name.
Actually, the name never had been particularly appropriate, for the High Line traverses some of the wettest country in these parts when rains are normal.  Frisco old-timers tell of an engineer who ran his engine through water so deep his engine's fire was extinguished.  He drifted to higher ground, rekindled the fire with brush from the adjoining woods.  And there's another story of an engineer who piloted his train over the softened roadbed and as the last car crept over the danger spot, ties and rails disappeared in the mud. 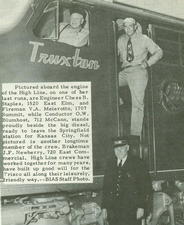 However inappropriate, "High Line" became the name of the friendly little train and High Line it is called today, as it approaches its last run to be made into Springfield this Thursday and back to Kansas City on Friday morning.
There is considerable grief over the passing away of the High Line in the 30 towns (some of them little and some quite sizeable) where it has stopped each day the past half century and more.  The High Line afforded the only rail transportation directly from Springfield to Clinton to Kansas City and back (the trip up is made one day, back home the next).  Passenger service on the High Line is being disontinued entirely as unprofitable.  Freight service will be afforded on a tri-weekly basis, with daily service out of Clinton through the busy chick-shipping season.
Among Frisco men who've worked on the High Line, its discontinuance evokes reminiscence and considerable sentiment.  The High Line in recent years has become a convenient run and a relatively safe one, rather a prized position, in fact and those who obtained work on it surrendered seniority claims on other lines of the road.  Consequently, its crews stayed together a long time.
For instance, Engineer Chess B. Staples has worked on the line for 46 years, 34 of them as engineer.  Conductor O.W. Blumhost and Brakeman J. F. Newberry have been with the line many many years.  Fireman V.A. Meierotto for a considerable time also.
The crew of course will be broken up when the High Line is discontinued.  Mr. Staples assumed they'd continue on the curtailed freight run for a time, didn't know to what work they'd be assigned later.
In older days, before highways were so good and cars so numerous, the High Line was a favored means of transportation for travelling salesmen -- "drummers" we called them.  And freight business once was so heavy on the line that 12 hours or more would be required for the run from Clinton to Springfield.  Crews sometimes would be caught by the "hog law" as railroad men call it, the requirement that no crew operate a train for more than 16 hours without relief.  Conductor Frank Pierpont, now retired, recalls a trip when the crew was stopped by that law at Willard and he and Luther Elsie waked on in to Springfield.
Good highways, bus and truck transportation, increased travel by private car, all have combined to lessen the business of the High Line.  Springfield, perhaps, will not be too greatly inconvenienced by its discontinuance of passenger service, since those travelling by rail to Kansas City can go by way of Fort Scott.  But the High Line always has carried a good many passengers coming into Springfield from Oregon, Washington, Idaho, California and other western states and those travelers, in the future, may face an all-day wait before making a connection to Springfield.  Many of the towns along the route will be without railroad passenger service entirely.  Among the High Line's 30 stops were Walnut Grove, Bolivar, Osceola, Harrisonville and Centropolis.
The High Line has seen its share of wrecks and tragedy.  On treacherous Weaubleau hill, Dan Lyons, grandfather of Steve Schneider, and his crew were killed.  Joe Harris, father of Paul Harris, was killed in a collision on the line.  Charlie Waits, father of the late Bert Waits, is another well remembered railroader who met death on the line.
But the High Line saw its good times too, times of appreciated service and friendly greetings from those who used it regularly and good fellowship between crew, station men along the line and passengers too.  True, the High Line was a slow train but it  travelled in daylight and newcomers to this country from the West often expressed their pleasure with the sight seeing advantages of the little train.  But nobody appears to have much time for sight seeing anymore.  They must get where they're going as rapidly as possible although they are not always sure just why.  The High Line surrenders to what some folks call Progress.  She does not go unmourned.

More information about the High Line route can be found online in an article called the Clinton Railroads: history of the "Leaky Roof".  We also have a booklet The Leaky roof: the story of a railroad, available for viewing at the Library Center.  See the All Aboard article about the end of the High Line route in the July-August issue, page 16.