It's such an exciting time when a child starts becoming a strong reader and is ready to move past leveled readers! Finding the right books can become a challenge, however, as kids fiction encompasses a wide variety of levels and interests. For kids getting ready to tackle chapter books, shorter chapters, some artwork and especially topics they enjoy reading about are important. A great first stop for families can be the Great Early Chapter Books booklist. This list is updated every few months and has some suggestions for kids that like unicorns, sports, animals, superheroes and more! For more great book ideas, head to the Booklists for ages 6-8, use Your Next Read or ask your favorite librarian!

Athena & the Magic Land by Joan Holub
"Young Athena is carried by a storm to Mount Olympus, where she follows the Hello Brick Road toward Sparkle City hoping Zeus will help her get home."

Bo's Magical New Friend by Rebecca Elliott
"Rainbow Tinseltail and the other students at Sparklegrove School for Unicorns are excited when a brand new unicorn, Sunny Huckleberry, enters the school, but Sunny does not know what his special magical power is, and the thought that he might not have any power at all is making him unhappy; Rainbow (whose power is granting wishes) is eager to help him--even though he does not seem to want her help." 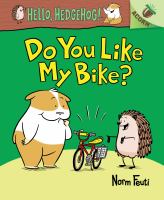 Do You Like My Bike? by Norman Feuti
"Hedgehog goes riding on his new bike, with his best friend Harry."

Eva's Treetop Festival by Rebecca Elliott
Having a Bloomtastic Festival at school to celebrate spring is a great idea--but Eva Wingdale, a young owl, discovers that it is also a lot of work, and there is nothing wrong with asking her friends for help.

Happy Paws by Vicky Fang
"While Layla and her three Bots (Beep, Boop, and Bop) are setting up for their rock band's performance, she gets some bad news, Happy Days Amusement Park is closing; Layla thinks she has the perfect solution: turn the place into an amusement park for dogs--but the new rides have to pass a safety inspection before Happy Paws Amusement Park can open."

Let's Get Cracking! by Cyndi Marko
Gordon Blue and his brother Benny, unlikely superheroes, must save Fowladelphia from Granny Goosebumps, who has filled the city with cookies that cause innocent chickens' feathers to fall off.

Little Shaq by Shaquille O'Neal
"Seven-year-old Shaquille O'Neal, a talented basketball and video game player, learns to share the spotlight with his cousin Barry when the youngsters work together to earn money by watering plants."

Princess Cora and the Crocodile by Laura Amy Schlitz
Unhappy queen-in-training Cora receives a pet crocodile from her fairy godmother, who disrupts her mundane daily routine.

Problem at the Playground by Courtney Carbone
"When pieces of equipment start disappearing from the new Aquamarina playground, it's up to Violet the mermaid and her best friend Wally the narwhal to solve the mystery. Back matter includes ocean science and civil engineering facts." 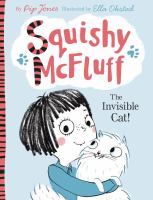 The Invisible Cat! by Pip Jones
"Can you see him? My kitten? Close your eyes tight. His fur is so soft and all silvery white Imagine him quick! Have you imagined enough? Oh, good, you can see him! It's Squishy McFluff! When Ava discovers an imaginary cat in the cabbage patch, she knows she's found a new best friend."

The Not-So Itty-Bitty Spiders by Amy Marie Stadelmann
"Beatrix is a witch, but her twin sister Olive is not, and when Beatrix plays one trick too many on Olive and their classmate Eddie the two decide to get back at her with a bucket of garden spiders--but when the spiders get into a growing potion and turn into giant spiders the three children have to work together to save their town."