Artemis Fowl by Eoin Colfer
When a twelve-year-old evil genius tries to restore his family fortune by capturing a fairy and demanding a ransom in gold, the fairies fight back with magic, technology, and a particularly nasty troll.
Series -
Artemis Fowl

Eragon by Christopher Paolini
Eragon, a young farm boy, finds a marvelous blue stone in a mystical mountain place. Before he can trade it for food to get his family through the hard winter, it hatches a beautiful sapphire-blue dragon, a race thought to be extinct. Eragon bonds with the dragon, and when his family is killed by the marauding Ra'zac, he discovers that he is the last of the Dragon Riders, fated to play a decisive part in the coming war between the human but hidden Varden, dwarves, elves, the diabolical Shades and their neanderthal Urgalls, all pitted against and allied with each other and the evil King Galbatorix.
Series -
Inheritance - Christopher Paolini
Other booklists with this title -
Dragons, Giants, and Other Magical Creatures
Gateway Award Winners 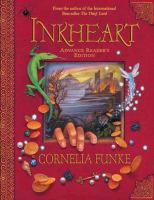 Inkheart by Cornelia Funke
Twelve-year-old Meggie learns that her father, who repairs and binds books for a living, can "read" fictional characters to life when one of those characters abducts them and tries to force him into service.
Series -
Inkheart Trilogy 1
Other booklists with this title -
Through the Looking Glass: Travel to Fantasy Worlds
Biblionovels: Books About Books

The Alchemyst: The Secrets of the Immortal Nicholas Flamel by  Michael Scott
While working at pleasant but mundane summer jobs in San Francisco, fifteen-year-old twins, Sophie and Josh, suddenly find themselves caught up in the deadly, centuries-old struggle between rival alchemists, Nicholas Flamel and John Dee, over the possession of an ancient and powerful book holding the secret formulas for alchemy and everlasting life.
Series -
Secrets of The Immortal Nicholas Flamel
Other booklists with this title -
Older Books for Younger Readers

The Golden Compass by Philip Pullman
Accompanied by her daemon, Lyra Belacqua sets out to prevent her best friend and other kidnapped children from becoming the subject of gruesome experiments in the Far North.
Series -
His Dark Materials - Philip Pullman
Other booklists with this title -
Epic Fantasy for Tolkien Fans
Read Like a Kid Again
Banned Books Week - Fantasy/Sci-Fi Edition

The Rithmatist by Brandon Sanderson
As Wild Chalklings threaten the American Isles and Rithmatists are humanity's only defense, Joel can only watch as Rithmatist students learn the magical art that he would do anything to practice.

The Unwanteds by Lisa McMann
In a society that purges thirteen-year-olds who are creative, identical twins Aaron and Alex are separated, one to attend University while the other, supposedly Eliminated, finds himself in a wondrous place where youths hone their abilities and learn magic.
Series -
The Unwanteds
Other booklists with this title -
Mark Twain Award Winners
Mark Twain Award Nominees 2013-2014

Wundersmith : The Calling of Morrigan Crow by  Jessica Townsend
Morrigan Crow is now a proud scholar in the elite Wundrous Society, but must prove that she belongs in the Society, while battling a new evil-- Provided by publisher.
Series -
Nevermoor ; 2.
Updated 04/19/2019
Find this booklist online at http://thelibrary.org/kids/books/booklist.cfm