A Wolf Called Wander by Rosanne Parry
A young wolf cub, separated from his pack, journeys 1000 miles across the Pacific Northwest, dealing with forest fires, hunters, highways, and hunger before finding a new home. Based on the true story of a wolf called OR-7.

Akata Witch by  Nnedi Okorafor
Twelve-year-old Sunny Nwazue, an American-born albino child of Nigerian parents, moves with her family back to Nigeria, where she learns that she has latent magical powers which she and three similarly gifted friends use to catch a serial killer.

Because of the Rabbit by Cynthia Lord
On the last night of summer, Emma and her Maine game warden father rescue a small domestic rabbit stuck in a fence; the very next day Emma starts fifth grade after years of being home schooled, excited and apprehensive about making new friends, but she is paired with Jack, a hyperactive boy, who does not seem to fit in with anyone--except that they share a love of animals, which draws them together, because of the rabbit.
Other booklists with this title -
Librarian's Picks: Audiobooks 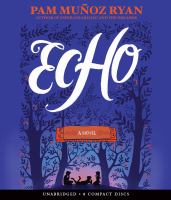 Echo by  Pam Muñoz Ryan
Read by Mark Bramhall, David de Vries, MacLeod Andrews, Rebecca Soler. Lost in the Black Forest, Otto meets three mysterious sisters and finds himself entwined in a prophecy, a promise, and a harmonica--and decades later three children, Friedrich in Germany, Mike in Pennsylvania, and Ivy in California find themselves caught up in the same thread of destiny in the darkest days of the twentieth century, struggling to keep their families intact, and tied together by the music of the same harmonica. Title from disc label.

For Black Girls Like Me by  Mariama Lockington
Eleven-year-old Makeda dreams of meeting her African American mother, while coping with serious problems in her white adopted family, a cross-country move, and being homeschooled.

Prairie Lotus by Linda Sue Park
In Dakota Territory in the 1880s, half-Chinese Hanna and her white father face racism and resistance to change as they try to make a home for themselves.
Other booklists with this title -
Historical Fiction: Kids from Other Times
Celebrating Asian American Voices

The Bone Garden by  Heather Kassner
Made from bone dust and imagination, Irreélle accidentally destroys another of Miss Vesper's creations and flees to the underside of the graveyard, seeking the magic that brings bones to life.

The Distance Between Me and the Cherry Tree by  Paola Peretti
When nine-year-old Mafalda learns she will go blind in six months from Stargardt Disease, she needs the help of family and friends to retain what is essential to her

The Line Tender by  Kate Allen
Following a tragedy that further alters the course of her life, twelve-year-old Lucy Everhart decides to continue the shark research her marine biologist mother left unfinished when she died years earlier.
Other booklists with this title -
Librarian's Picks: Audiobooks
Truman Award Nominees 2021-2022

The One and Only Bob by Katherine Applegate
Bob sets out on a dangerous journey in search of his long-lost sister with the help of his two best friends, Ivan and Ruby. As a hurricane approaches and time is running out, Bob finds courage he never knew he had and learns the true meaning of friendship and family.
Other booklists with this title -
Librarian's Picks: Audiobooks

The Simple Art of Flying by  Cory Leonardo
Sometimes flying means keeping your feet on the ground... Born in a dismal room in a pet store, Alastair the African grey parrot dreams of escape to bluer skies. He'd like nothing more than to fly away to a palm tree with his beloved sister, Aggie. But when Aggie is purchased by twelve-year-old Fritz, and Alastair is adopted by elderly dance-enthusiast and pie-baker Albertina Plopky, the future looks ready to crash-land. In-between anxiously plucking his feathers, eating a few books, and finding his own poetic voice, Alastair plots his way to a family reunion. But soon he's forced to choose between the life he's always dreamed of and admitting the truth: that sometimes, the bravest adventure is in letting go.

The Unicorn Quest by  Kamilla Benko
In an antique-filled mansion, sisters Claire and Sophie find a ladder to the magical land of Arden, where wraiths roam freely, unicorns have disappeared, and the guilds of magic no longer trust each other.
Updated 12/18/2021
Find this booklist online at http://thelibrary.org/kids/books/booklist.cfm