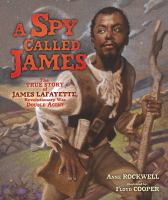 A Spy Called James: The True Story of James Lafayette, Revolutionary War Double Agent by Anne Rockwell
This is the true story of James Lafayette, a slave who spied for George Washington's army during the American Revolution. But while America celebrated its newfound freedom, James returned to slavery. His service hadn't qualified him for the release he'd been hoping for. For James the fight wasn't over; he'd already helped his country gain its freedom, now it was time to win his own. 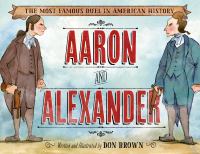 Aaron and Alexander by Don Brown
Aaron Burr and Alexander Hamilton were both fierce patriots during the Revolutionary War, but the politics of the young United States of America put them in constant conflict. Their extraordinary story of bitter fighting and resentment culminates in their famous duel.

Alexander Hamilton by  Libby Romero
Profiles the life and work of a founding father, from his rivalry with Thomas Jefferson to his portrayal on Broadway

Alexander Hamilton by James Buckley Jr.
Alexander Hamilton is known not only for his political brilliance, but also for his strong principles and astonishing achievements. In this biography for kids 8-12, read about how, from humble beginnings as an orphan, Hamilton defied all the odds and made a lasting name for himself in many arenas, including politics, finance, and the military.
Series -
DK Life Stories

Alexander Hamilton: The Making of America by  Teri Kanefield
The America that Alexander Hamilton knew was largely agricultural and built on slave labor. In contrast, he envisioned something different: along with agriculture and small towns, he imagined a multiracial, urbanized, capitalistic America with a strong central government. Because of the systems Hamilton set up and the ideas he left, his vision won out. Here is the story that epitomizes the American dream--a poor immigrant who made good in America 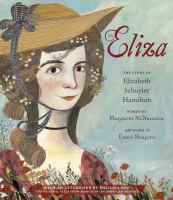 Eliza: The Story of Elizabeth Schuyler Hamilton by Margaret McNamara
Presents the life of Eliza Hamilton, wife of founding father Alexander Hamilton, covering her early years in New York, her married life with Alexander, and her later years as a generous philanthropist. 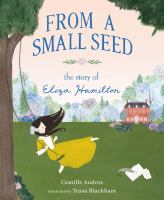 From a Small Seed: The Story of Eliza Hamilton by  Camille Andros
The author presents a picture book biography of Eliza Schuyler Hamilton, co-founder and director of the first private orphanage in New York City and wife of founding father Alexander Hamilton.

George Washington by Time Inc.
George Washington has always held a special place in Americans' hearts. Everyone can picture him as a white-haired statesman leading the new nation. But before he became our first president, he had already had enough adventures for several lifetimes. As a young man, he explored the wilderness of the American West, fought a disastrous military campaign against the French, pined for unrequited love, and retired. Then he became leader of the Continental Army. From the hardships and heartaches of his early years to the politics, betrayals, and victories of his public life, this is the whole story of one of America's most beloved Founding Fathers.
Series -
Heroes of History 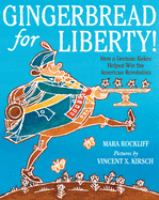 I Survived the American Revolution, 1776 by Lauren Tarshis
Hundreds of American soldiers were already dead. Battlefields in Massachusetts and New York were soaked in the blood of American patriots. And 11-year-old Nathaniel Knox was in the midst of it all, trapped in a swamp and fighting for his life.
Series -
I Survived

Lafayette!: A Revolutionary War Tale by  Nathan Hale
Tells the story of the Marquis de Lafayette: what happened before and during the American Revolution, including all the Frenchman's escapades across France and the colonies.
Series -
Nathan Hale's hazardous tales

Lin-Manuel Miranda by Laurie Calkhoven
He couldn't decide whether he wanted to be a writer, singer, actor, songwriter, or rapper, so he decided to become all of them. You should meet Lin-Manuel Miranda!
Series -
You Should Meet 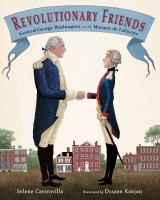 Revolutionary Friends: General George Washington and the Marquis de Lafayette by  Selene Castrovilla
Young fans of the smash Broadway hit "Hamilton" will enjoy this narrative nonfiction picture book story about the important friendship between George Washington and the Marquis de Lafayette during the Revolutionary War. Lafayette has come to America to offer his services to the patriotic cause. Inexperienced but dedicated, he is a much-needed ally and not only earns a military position with the Continental Army but also Washington's respect and admiration. This picture book presents the human side of history, revealing the bond between two famous Revolutionary figures. Both the author and illustrator worked with experts and primary sources to represent both patriots and the war accurately and fairly.

The American Revolution by Ben Thompson
A fierce group of rebels who will never surrender. An empire with an army that has never known defeat. And a war that changed the world forever.
Series -
Guts & Glory

The Hamilton-Burr Duel by Dan Gutman
The Flashback Four are coerced by a secret government organization, NOYB, to travel to July 1804 Weehawken, New Jersey, to witness the duel between Alexander Hamilton and Aaron Burr.

The Revolutionary War: An Interactive History Adventure by Elizabeth Raum
It's the late 1700s. Tensions are brewing between the American colonies and Great Britain. The Revolutionary War is about to begin. Will you: Help the network of patriot spies in your city? Or ... Fight for independence as a patriot soldier? Or ... Work to keep the colonies under British rule?
Series -
You Choose Books

The Thrifty Guide to the American Revolution: A Handbook for Time Travelers by  Jonathan W. Stokes
Provides useful information for the practical time traveler, including appropriate period dress, how to fire a musket, what to do if you are shot by one, and how to survive a stint in the Continental Army. 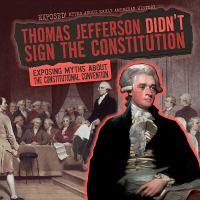 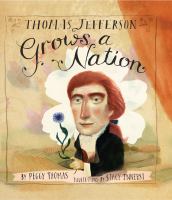 Thomas Jefferson Grows a Nation by Peggy Thomas
Examines the life and career of Thomas Jefferson, who in addition to his acccomplishments as a politician and president was also talented in the field of agriculture.

Who was Alexander Hamilton by  Pam Pollack and Meg Belviso
Highlights the life and accomplishments of the founding father, from his childhood as an orphan in the West Indies to his role in developing the Constitution and his tragic death in a duel with Aaron Burr.
Updated 07/16/2020
Find this booklist online at http://thelibrary.org/kids/books/booklist.cfm