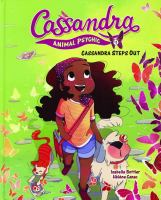 Cassandra, Animal Psychic: Cassandra Steps Out by  Isabelle Bottier
Cassandra has a gift. Animals can show her what they're thinking. And after keeping her talent a secret, Cassandra sets out to help pets and their people. The trouble is, other parts of Cassandra's life are changing too. Her mom has a boyfriend she really likes, but his daughter can't stand Cassandra. And Cassandra's best friend is about to leave town. Not even her trusty dog Miss Dolly can make things feel okay. When Cassandra gets on the trail of a lost cat, will she be able to help its owners? Or will her first case be a flop?
Series -
Cassandra Animal Psychic

Dungeon Critters by  Natalie Riess
Join the Dungeon Critters--a tight-knit squad of animal companions--on a wild adventure investigating a sinister botanical conspiracy among the furry nobility. As they risk their lives traveling through haunted dungeons, swamps, and high society balls--they also come closer together as friends.

El Deafo by Cece Bell
The author recounts in graphic novel format her experiences with hearing loss at a young age, including using a bulky hearing aid, learning how to lip read, and determining her "superpower."
Other booklists with this title -
Newbery Award
Books Every Fourth Grader Should Know

Just Jaime by  Terri Libenson
The last day of seventh grade has Jaime and Maya wondering who their real friends are. Jaime knows something is off with her friend group. They've started to exclude her and make fun of the way she dresses and the things she likes. At least she can count on her BFF, Maya, to have her back . . . right? Maya feels more and more annoyed with Jaime, who seems babyish compared to the other girls in their popular group. It's like she has nothing in common with Jai anymore. Are their days as BFFs numbered . . . ?
Series -
Emmie & Friends

New Kid by  Jerry Craft
Seventh grader Jordan Banks loves nothing more than drawing cartoons about his life. But instead of sending him to the art school of his dreams, his parents enroll him in a prestigious private school known for its academics, where Jordan is one of the few kids of color in his entire grade. As he makes the daily trip from his Washington Heights apartment to the upscale Riverdale Academy Day School, Jordan soon finds himself torn between two worlds--and not really fitting into either one.
Other booklists with this title -
Newbery Award
Coretta Scott King Author Award
Stand Up, Speak Out
Mark Twain Award Nominees 2021-2022
Black History Month

Pepper Page Saves the Universe! by Landry Q. Walker
The year is 2421. Awkward and shy, Pepper buries herself in the universe of the classic fictional superhero Supernova to avoid dealing with the perils of the 9th grade. But then fate intervenes when Pepper encounters a strange cat named Mister McKittens and stumbles into a volatile science experiment run by a sinister substitute teacher named Doctor Killian. Pepper is flung into another dimension, bringing her face to face with an order of cosmic beings who declare her to be the steward of their great power, champion of harmony in the universe, protector of worlds present and past. Pepper is pretty sure they got the wrong girl.

Pilu of the Woods by  Mai K. Nguyen
One day, when Willow's bad feelings get the better of her, she decides to run away into the woods near her house. There, she meets Pilu, a lost tree spirit who can't find her way back home. Willow offers to help Pilu, and the two quickly become friends. But the journey is long, and Pilu isn't so sure she's ready to return home yet...

Pokémon Adventures: Black 2 and White 2, Vol. 1 by Hidenori Kusaka
When Team Plasma attacks the Unova region using Pokémon-controlling machines, Nate infiltrates the Pokémon Trainers' School in order to acquire a memory card that can jam the signals, which is in the possession of Rosa, a student. Pokémon Adventures is a long running series all about awesome Pokémon action and fun hijinks.
Series -
Pokemon Adventures

Sparks! Double Dog Dare by  Ian Boothby
Charlie and August, the two cats that control the mechanical superhero dog, Sparks, are keeping the city safe. But when a second, evil Sparks shows up and starts causing trouble around town, everybody blames the real Sparks. Determined to prove that Sparks is still the hero everyone can count on, Charlie and August set out to uncover the shocking truth about who is responsible for all the chaos.
Series -
Sparks!

The Breakaways by  Cathy G Johnson
When a popular student encourages her to join the soccer team, Faith signs up even though she has never played the game and learns about loyalty and friendship. "Bad at soccer. Okay at friends."

The Cardboard Kingdom by  Chad Sell
Welcome to a neighborhood of kids who transform ordinary boxes into colorful costumes, and their ordinary block into cardboard kingdom. This is the summer when sixteen kids encounter knights and rogues, robots and monsters--and their own inner demons--on one last quest before school starts again. In the Cardboard Kingdom, you can be anything you want to be--imagine that!
Series -
Cardboard Kingdom

The Coldfire Curse by Jordan Quinn
As the pampered pet dragon of the Prince of Wrenly, Ruskin has never known life beyond the walls of the palace. Until the day a young dragon from Crestwood comes to the palace to plead for help. An evil curse has been unleashed in Crestwood and threatens to destroy all of Wrenly. Ruskin has a choice to make: stay safe at home in the palace, or try to help save his kingdom. For Ruskin, there is no choice. He knows he has to try and help if he can. What Ruskin and his new dragon friends don't yet realize is that the curse was awoken for one reason only--to put Ruskin in harm's way. The mission to reverse the curse is far more dangerous than anyone realizes...in fact, it's seemingly impossible. Why is Ruskin the target of these shadowy forces? And how far is Ruskin willing to go to save his kingdom?
Series -
Dragon Kingdom of Wrenly

The Leak by  Kate Reed Petty
Ruth Keller is brash and precocious; she argues with her dentist, her parents, and her teachers. So, when she discovers a strange black slime in the man-made lake of her suburban neighborhood, she decides to investigate. Fortified by the encouragement of those around her, Ruth seeks the truth at all costs, even if it means taking on the rich local country club owner, who she believes is responsible for the pollution. Between the teasing of former friends, and a sudden viral spotlight, Ruth discovers how difficult it is for a journalist to take a stand for what's right in the face of critique and controversy. From writer Kate Reed Petty and illustrator Andrea Bell, comes a story about corruption, pollution, and freedom of the press, and the young journalist at the center of it all.

Unicorn Famous : Another Phoebe and Her Unicorn Adventure by Dana Simpson
When your best friend is a unicorn, every day is a stroll down the red carpet. Phoebe Howell's unicorn BFF, Marigold Heavenly Nostrils, is happy to provide the celebrity treatment -- teaching Phoebe fancy new spells, giving her a ride to school so she doesn't have to ride the bus, and even negotiating with the tooth fairy on her behalf. But when Phoebe starts noticing that unicorns have become a trendy fashion statement, she doesn't feel quite so unique. Fortunately, she's distracted by adventures including a visit to the unicorn community and a trip to the woods to see her friend Dakota receive an unusual honor at the goblin award ceremony. Unicorn Famous is filled with amusing examples of the extraordinary lengths friends will go to make each other feel special.
Series -
Heavenly Nostrils: AKA Phoebe and her Unicorn

Yorick and Bones by  Jeremy Tankard
Yorick is a skeleton who was just dug up after a few hundred years of sleep. He speaks like it too. 'Forsooth, my joy, I barely can contain!' Bones is the hungry dog who did the digging. Though he cannot speak, he can chomp. What will become of these two unlikely companions? Will Yorick ever find the friend he seeks? Will Bones ever find a tasty treat that does not talk back? The course of true friendship never did run smooth.
Series -
Yorick and Bones
Updated 07/07/2022
Find this booklist online at http://thelibrary.org/kids/books/booklist.cfm