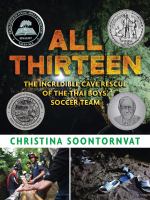 All Thirteen : The Incredible Cave Rescue of the Thai Boys' Soccer Team by Christina Soontornvat
On June 23, 2018, twelve young players of the Wild Boars soccer team and their coach enter a cave in northern Thailand seeking an afternoon's adventure. But when they turn to leave, rising floodwaters block their path out. The boys are trapped! Before long, news of the missing team spreads, launching a seventeen-day rescue operation involving thousands of rescuers from around the globe. Combining firsthand interviews of rescue workers with in-depth science and details of the region's culture and religion, [the author]...masterfully shows how both the complex engineering operation above ground and the mental struggles of the thirteen young people below proved critical in the life-or-death mission.--|cPublisher's description. ________ A typical Saturday -- A sky full of water -- The cave of the sleeping lady -- First on the scene -- Trapped -- The cave man -- The dangers of cave diving -- Empty bellies, clear minds -- At war with the water -- The problem solvers -- The sump divers -- Coach Elk -- The water expert -- The rescue stalls -- The beautiful game -- Going back in -- Creaing a diversion -- One last try -- Brilliant -- Now what? -- The get-it-done crew -- Panic -- A tragic loss -- Risking it all -- A very important meeting -- Stage one: rehearsals -- Stage two: today is D-day -- Alone in teh dark -- Mission possible -- The sleeping lady has the final say -- It should not have worked. ________ Includes bibliographical references and index.
Other booklists with this title -
Newbery Award
Sibert Medal

American As Paneer Pie by  Supriya Kelkar
When a racist incident rocks her small Michigan town, eleven-year-old Lekha must decide whether to speak up or stay silent, even as she struggles to navigate her life at home, where she can be herself, and at school, where she is teased about her culture. 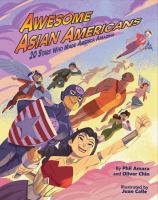 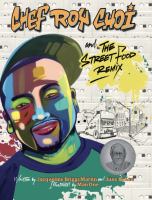 Chef Roy Choi and the Street Food Remix by  Jacqueline Briggs Martin & June JoLee
Describes the popular street cook's life, including working in his family's restaurant as a child, figuring out what he wanted to do with his life, and his success with his food truck and restaurant.
Other booklists with this title -
Sibert Medal

Farah Rocks Fifth Grade by  Susan Muaddi Darraj
Fifth-grader Farah Hajjar and her best friend Allie Liu are hoping to go to the Magnet Academy for their middle school years, instead of Harbortown Elementary/Middle School; but when a new girl Dana Denver starts tormenting Farah and her younger brother, Samir, she decides she can not leave Samir to face the bully alone, especially since the adults and even Allie do not seem to be taking the matter seriously--so Farah comes up with a plan, one which involves lying to those closest to her.
Series -
Farrah rocks

Hello, Universe by Erin Entrada Kelly
Virgil feels out of place in his crazy-about-sports family. Valencia is deaf, smart, and loves everything about nature. Kaori is a self-proclaimed psychic, whose little sister, Gen, is always following her around. And Chet wishes the weird kids would just stop being so different so that he can concentrate on basketball. They aren't friends. But when Chet pulls a prank that traps Virgil and his pet guinea pig at the bottom of a well, Kaori, Gen, and Valencia begin a quest to find the missing Virgil.
Other booklists with this title -
Newbery Award

How to Solve a Problem: The Rise (and Falls) of a Rock-Climbing Champion by  Ashima Shiraishi
Describes rock-climber Ashima solving a complex problem in terms of rock climbing, which may include false starts, breaking the challenge into smaller parts, and always being thoughtful and persistent.

I'm Ok by  Patti Kim
Ok Lee knows it's his responsibility to help pay the bills. With his father gone and his mother working three jobs and still barely making ends meet, there's really no other choice. If only he could win the cash prize at the school talent contest! But he can't sing or dance, and has no magic up his sleeves, so he tries the next best thing: a hair braiding business. It's too bad the girls at school can't pay him much, and he's being befriended against his will by Mickey McDonald, the unusual girl with a larger-than-life personality. Who needs friends? They'd only distract from his mission, and Ok believes life is better on his own. Then there's Asa Banks, the most popular boy in their grade, who's got it out for Ok. But when the pushy deacon at their Korean church starts wooing Ok's mom, it's the last straw. Ok has to come up with an exit strategy--fast.

Prairie Lotus by Linda Sue Park
In Dakota Territory in the 1880s, half-Chinese Hanna and her white father face racism and resistance to change as they try to make a home for themselves.
Other booklists with this title -
Historical Fiction: Kids from Other Times
Older Books for Younger Readers

Red, White and Whole by  Rajani LaRocca
Reha feels torn between two worlds: school, where she's the only Indian American student, and home, with her family's traditions and holidays. But Reha's parents don't understand why she's conflicted--they only notice when Reha doesn't meet their strict expectations. Reha feels disconnected from her mother, or Amma, although their names are linked--Reha means "star" and Punam means "moon"--but they are a universe apart. Then Reha finds out that her Amma is sick. Really sick. Reha, who dreams of becoming a doctor even though she can't stomach the sight of blood, is determined to make her Amma well again. She'll be the perfect daughter, if it means saving her Amma's life.
Other booklists with this title -
Newbery Award

Sam Wu Is Not Afraid of Ghosts by  Katie & Kevin Tsang
After an embarrassing incident on his school field trip, Sam is determined to prove that he is not afraid of ghosts.

Secret Coders by Gene Luen Yang
Welcome to Stately Academy, a school which is just crawling with mysteries to be solved! The founder of the school left many clues and puzzles to challenge his enterprising students. Using their wits and their growing prowess with coding, Hopper and her friend Eni are going to solve the mystery of Stately Academy no matter what it takes! Lexile 380
Series -
Secret Coders

Stand Up, Yumi Chung! by  Jessica Kim
When eleven-year-old Yumi Chung stumbles into a kids' comedy camp she is mistaken for another student, so she decides to play the part.

Stargazing by  Jen Wang
Growing up in the same Chinese-American suburb, perfectionist Christine and artistic, confident, impulsive Moon become unlikely best friends, whose friendship is tested by jealousy, social expectations, and illness.
Other booklists with this title -
Middle Grade Comics and Graphic Novels

The Boys in the Back Row by  Mike Jung
Best friends Matt and Eric are hatching a plan for one big final adventure together before Eric moves away: during the marching band competition at a Giant Amusement Park, they will sneak away to a nearby comics convention and meet their idol--a famous comic creator.

The Comeback by  E. L. Shen
Twelve-year-old Maxine Chen dreams of being a figure skating champion, but a remarkably talented new girl at the arena and a racist classmate at school test her resolve.

The Mystery of the Masked Medalist by  Maia Shibutani and Alex Shibutani
Accompanying their journalist parents to the 2020 Summer Olympics in Tokyo, twelve-year-old Andy Kudo and his eleven-year-old sister Mika find themselves immersed in an augmented reality game developed by a former Olympic medalist, that brings players together from all over the world to search Tokyo for virtual medals and clues to the secretive creator's identity.
Series -
Kudo kids

The Serpent's Secret by  Sayantani DasGupta
Up until her twelfth birthday, Kiranmala considered herself an ordinary sixth-grader in Parsippany, New Jersey, but then her parents disappear and a drooling rakkhosh demon shows up in her kitchen, and soon she is swept into another dimension, full of magic, winged horses, talking birds (very annoying), and cute princes--and somehow Kiranmala needs to sort it all out, find her parents, and basically save the world.
Series -
Kiranmala and the Kingdom Beyond

When You Trap a Tiger by  Tae Keller
When Lily, her sister Sam, and their mother move in with her sick grandmother, Lily traps a tiger and makes a deal with him to heal Halmoni.
Other booklists with this title -
Newbery Award