Agent Moose by Mo O'Hara
Agent Moose, the best (worst) secret agent in the Big Forest, and his slightly-more-intelligent sidekick Owlfred are on the case ... Something fishy is going on at the South Shore. Folks just disappear and are never seen again. But when Agent Moose learns that a key witness has gone missing, he and Owlfred ride to the rescue. Will they find the missing turtle before time runs out?
Series -
Agent Moose

Bad Kitty Meets the Baby by Nick Bruel
Bad Kitty is not pleased when a baby joins her family. Includes fun facts and tips for training a cat to perform tricks.Lexile Level: 720

Catwad: It's Me Two by Jim Benton
Catwad and Blurmp are back and ready for more adventures! In this newest collection of hilarious stories, the dynamic feline duo explore fine art, travel to an alternate reality where the world has become extraordinarily dumb, get into gaming, and more! From monsters under Blurmp's bed to all the reasons you should NEVER eat salad, this newest volume of Catwad has something for everyone!
Series -
Catwad

Dinomighty! by  Doug Paleo
Everything is pleasant and good in Dinotown--until Teri-Dactyl discovers a cryptic email that says the precious Golden Egglettes are in danger. Dinomighties unite! But can they spring into action fast enough to save these valuable jewels from evil baddies?
Series -
Dinomighty 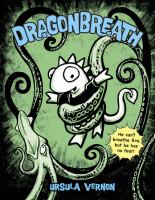 Dragonbreath, Ahoy! by Ursula Vernon
Danny Dragonbreath and his friend Wendell get an up-close underwater tour of the Sargasso Sea from Danny's sea-serpent cousin, encountering giant squid and mako sharks--and learn about standing up to bullies in the process.
Series -
Dragonbreath

InvestiGATORS by  John Patrick Green
With their Very Exciting Spy Technology and their tried-and-true, toilet-based travel techniques, the InvestiGators are undercover and on the case! And on their first mission together, they have not one but two mysteries to solve! Can Mango and Brash uncover the clues, crack their cases, and corral the crooks--or will the criminals wriggle out of their grasp?
Series -
InvestiGATORS 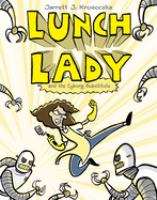 Lunch Lady and the Cyborg Substitute by Jarrett J. Krosoczka
The school lunch lady is a secret crime fighter who uncovers an evil plot to replace all the popular teachers with robots.

Mr. Bambuckle Rules the School by  Tim Harris
The students of room 12B are delighted by their eccentric new teacher, Mr. Bambuckle, but Principal Sternblast is not impressed.
Series -
Mr. Bambuckle's remarkables

On the Bad Planet by James Kochalka
Exploding from the beloved Glorkian Warrior video game and graphic novels: a hilarious new outer-space adventure, from the award-winning creator of Johnny Boo! Who keeps the galaxy silly? The Glork Patrol! When the patrol crash-lands on the sinister Bad Planet, Baby Gonk finds a giant egg... so of course he sits on it. Soon it hatches a baby Quackaboodle, the most dangerous creature in the universe! Will there be a fight to the death, or will the Baby Quackaboodle become the newest member of the Glork Patrol? Join author James Kochalka for a new beginning to the wild and wacky universe of Glork!
Series -
Glork Patrol 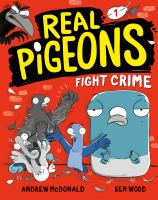 Real Pigeons Fight Crime! by  Andrew McDonald and Ben Wood
Ever wonder why pigeons always act so weird? It's because they're out there chasing the bad guys and saving your butts! Did you know your city is protected by a secret squad of crime-fighting pigeons? It's true! With master of disguise Rock Pigeon, bendy Tumbler, strong Frillback and super-finder Homey, the Real Pigeons will solve any mystery and fight any bad guy to keep the city safe!
Series -
Real Pigeons

Stick dog by Tom Watson
Stick Dog and his four friends - Stripes, Mutt, Poo-Poo and Karen - will do anything to steal some sweet-smelling hamburgers from a family at Picasso Park! 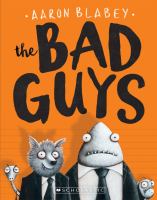 The Bad Guys by Aaron Blabey
The Bad Guys, Mr. Wolf, Mr. Shark, Mr. Snake, and Mr. Piranha, want to be heroes, and they decide that the way to do it is free the 200 dogs in the city dog pound--but their plan soon goes awry.
Series -
Bad Guys 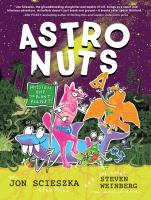 The Plant Planet by Jon Scieszka
Carbon dioxide is out of control on Earth, and the fate of humankind rests in the paws of four experimental, untested Animal Astronauts (AlphaWolf, SmartHawk, LaserShark, and StinkBug) who are seeking another habitable planet; first destination is the Plant Planet which at first looks perfect, except that the abundant plant life can think for itself--and it thinks that it really does not like the AstroNuts.
Series -
Astro-Nuts

The Super Life of Ben Braver by  Marcus Emerson
Ben Braver is sent to a secret school where kids with super abilities learn to control their powers, even though he does not have any super abilities and no one has ever thought he could be special.

The Unflushables by  Ron Bates
Thirteen-year-old Sully Stringfellow, his arch-nemesis Izzy Cisco, friend Moleman, and a league of long-forgotten plumber heroes team up to save Nitro City from mutant creatures in the sewers.
Updated 04/17/2021
Find this booklist online at http://thelibrary.org/kids/books/booklist.cfm