Amber & Clay by Laura Amy Schlitz
"In a warlike land of wind and sunlight, ringed by a restless sea, live Rhaskos and Melisto, spiritual twins with little in common beyond the violent and mysterious forces that dictate their lives. A Thracian slave in a Greek household, Rhaskos is as common as clay, a stable boy worth less than a donkey, much less a horse. Wrenched from his mother at a tender age, he nurtures in secret, aided by Socrates, his passions for art and philosophy. Melisto is a spoiled aristocrat, a girl as precious as amber but willful and wild. She'll marry and be tamed--the curse of all highborn girls--but risk her life for a season first to serve Artemis, goddess of the hunt. Bound by destiny, Melisto and Rhaskos--Amber and Clay--never meet in the flesh. By the time they do, one of them is a ghost. But the thin line between life and death is just one boundary their unlikely friendship crosses."--|cPublisher's description. 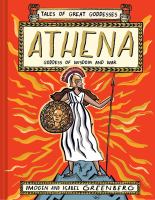 Athena : Goddess of Wisdom and War by  Imogen Greenberg
"A fun, feminist take on the myth of Athena follows the adventures of the goddess of wisdom, war, and courage as she helps both gods and mortals alike."

Sal & Gabi Break the Universe by  Carlos Alberto Pablo Hernandez
In order to heal after his mother's death, Sal learned how to meditate. But no one expected him to be able to take it further and 'relax' things into existence. Turns out he can reach into time and space to retrieve things from other universes.
Other booklists with this title -
Pura Belpre Author Award

The Cassandra Curse by  Chantel Acevedo
"When a young Cuban American girl discovers that she's one of the nine muses of Greek mythology, she must use her newfound powers to help a brilliant classmate who is destined to save humanity"--|cProvided by publisher. Grades 4-6. Balzer + Bray. Ages 8-12.|
Series -
Muse Squad

The Hidden Oracle by Rick Riordan
"After angering his father Zeus, the god Apollo is cast down from Olympus. He must learn to survive in the modern world until he can somehow find a way to regain Zeus's favor"-- Provided by publisher.

The Maze of the Menacing Minotaur by Crispin Boyer
"Zeus the hamster and his cohorts escape their cages at Mount Olympus Pet Center in Athens, Georgia, to solve the mystery of the labyrinth--the center's duct system." Grades 4-6. Ages 8-12.
Series -
Zeus the Mighty

The Oddyssey by  David Slavin
"Sometimes it feels like Oddonis can't do anything right. Especially compared to his literally perfect twin brother, Adonis. But this time, Oddonis has really messed up by accidentally turning his father, the all-powerful king of the gods, Zeus, into a giant baby. Now it's up to Oddonis to assemble a team of his odd friends--Mathena, Gaseous, and Puneous--and journey to the underworld to get the curse reversed. Along the way, Oddonis will have to overcome a series of dangerous obstacles, his obnoxious brother, his own self-doubt, and the horrible scents of his best friend Gaseous. Can Gods as unlikely, unusual, and unheroic as Oddonis and his friends really save the day?" --|cAmazon.com
Series -
Odd gods

Who Let the Gods Out? by  Maz Evans
"Twelve-year-old Elliot Hooper has many problems: his mother has been behaving strangely, they are in danger of loosing their farm to a mean-spirited developer, and he is failing at school, so when he finds a girl in the cowshed, and she announces that she is Virgo, an immortal constellation, it just seems part of the normal chaos--but soon he is swept up in the Gods' hunt for prisoner 42, Thanatos, Daemon of Death, whom Elliot has set free from his prison below Stonehenge."
Updated 01/13/2022
Find this booklist online at http://thelibrary.org/kids/books/booklist.cfm