Amina's Voice by  Hena Khan
A Pakistani-American Muslim girl struggles to stay true to her family's vibrant culture while simultaneously blending in at school. After her local mosque if vandalized, she is devastated. Her friend Soojin is talking about changing her name. Does Amina need to become more American and hide who she really is?

Becoming Kid Quixote : A True Story of Belonging in America by  Sarah Sierra
A young readers' companion to the adult novel Kid Quixotes by Stephen Haff. Narrated by one extraordinary ten-year-old girl, this inspiring memoir tells the story of a daughter of Mexican American immigrants who finds her voice through the power of words and performance of Cervantes' Don Quixote. When a shy girl named Sarah Sierra first joins an after-school program in her neighborhood, she never expects to travel back in time and discover the words of Miguel de Cervantes. But at Still Waters in a Storm, a teacher named Stephen and a group of kids have pushed together tables piled high with books so they can gather round to talk about and translate Cervantes' classic, Don Quixote de La Mancha. They begin to reimagine Don Quixote--the story of an idealistic dreamer from Spain who traveled around trying to right the world's wrongs--as the story of a group of modern-day kids from immigrant families in Brooklyn. The stories the kids write in class become a musical play--expressing the plight of today's immigrants and using Quixote as inspiration. And Sarah, once very shy, soon will play the leading role as Kid Quixote.

Good Night Stories for Rebel Girls. 2 by  Francesca Cavallo
While still inspiring rebel girls of the world to dream bigger, aim higher, and fight harder, this sequel is bigger than each of us, bigger than our individual hopes, and certainly bigger than our fears. 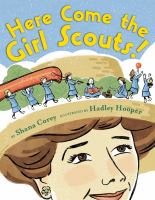 Here Come the Girl Scouts! : The Amazing All-True Story of Juliette "Daisy" Gordon Low and Her Great Adventure by Shana Corey
A one hundredth anniversary tribute to the Girl Scouts founder describes how she rejected the conventions of Victorian culture and introduced her pioneer family's passion for service, adventure, and independence to the girls of her time. Includes bibliographical references.

Insignificant Events in the Life of a Cactus by  Dusti Bowling
New friends and a mystery help Aven, thirteen, adjust to middle school and life at a dying western theme park in a new state, where her being born armless presents many challenges.
Other booklists with this title -
Mystery & Adventure
Mark Twain Award Nominees 2019-2020

Kristy's Great Idea: a Graphic Novel by Raina Telgemeier
Follows the adventures of Kristy and the other members of the Baby-sitters Club as they deal with crank calls, uncontrollable two-year-olds, wild pets, and parents who do not always tell the truth.
Series -
Baby-Sitter's Club 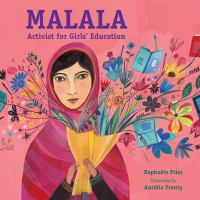 Malala : Activist for Girls' Education by  Raphaële Frier
Describes how a young Pakistani activist was violently targeted by the Taliban for her efforts to secure educational rights for girls. Translation of: Malala : pour le droit des filles à l'éducation.

Mustaches for Maddie by  Chad Morris
Inspired by the true story. Maddie is a normal twelve-year-old, but when a CT scan reveals she has a brain tumor, it will take all her imagination, courage, and support from her friends and family to meet this new challenge.
Other booklists with this title -
Mark Twain Award Nominees 2019-2020

Notorious RBG : The Life and Times of Ruth Bader Ginsburg by  Irin Carmon
Presents an illustrated biography of the feminist icon and legal pioneer who has changed the world, especially in the realms of gender equality and civil rights. Includes bibliographical references. Ages 8-12.

Other Words for Home by  Jasmine Warga
Sent with her mother to the safety of a relative's home in Cincinnati when her Syrian hometown is overshadowed by violence, Jude worries for the family members who were left behind as she adjusts to a new life with unexpected surprises.
Other booklists with this title -
Newbery Award

Real Friends by Shannon Hale
When her best friend Adrienne starts hanging out with the most popular girl in class, Shannon questions whether she and Adrienne will stay friends, and if she is part of the clique.
Other booklists with this title -
Mark Twain Award Nominees 2019-2020
Back to School 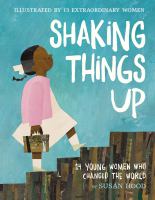 Shaking Things Up : 14 Young Women Who Changed the World by Susan Hood
Fresh, accessible, and inspiring, Shaking Things Up introduces fourteen revolutionary young womeneach paired with a noteworthy female artistto the next generation of activists, trail-blazers, and rabble-rousers.

The First Rule of Punk by  Celia C. Pérez
Twelve-year-old María Luisa O'Neill-Morales (who really prefers to be called Malú) reluctantly moves with her Mexican-American mother to Chicago and starts seventh grade with a bang--violating the dress code with her punk rock aesthetic and spurning the middle school's most popular girl in favor of starting a band with a group of like-minded weirdos.
Other booklists with this title -
Pura Belpre Author Award

Wonder Women : 25 Innovators, Inventors, and Trailblazers Who Changed History by  Sam Maggs
Smart women have always been able to achieve amazing things, even when the odds were stacked against them. In Wonder Women, author Sam Maggs tells the stories of the brilliant, brainy, and totally rad women in history who broke barriers as scientists, engineers, mathematicians, adventurers, and inventors. Plus, interviews with real-life women in STEM careers, an extensive bibliography, and a guide to women-centric science and technology organizations--all to show the many ways the geeky girls of today can help to build the future.
Updated 09/22/2020
Find this booklist online at http://thelibrary.org/kids/books/booklist.cfm