Books Made into Movies 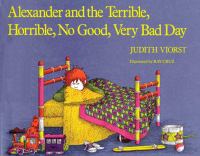 Alexander and the Terrible, Horrible, No Good, Very Bad Day by Judith Viorst
Recounts the events of a day when everything goes wrong for Alexander.
Other booklists with this title -
Books Every First Grader Should Know

Alexander and the Terrible, Horrible, No Good, Very Bad Day by  Walt Disney
It follows the exploits of eleven-year-old Alexander as he experiences the most terrible and horrible day of his young life. But when Alexander tells his upbeat family about the misadventures of his disastrous day, he finds little sympathy and begins to wonder if bad things only happen to him. Rated PG.

Borrowers by  Universal Studios
Beneath the kitchen floor is the world of the Borrowers -- Pod and Homily Clock and their daughter, Arrietty. Whatever the Clocks need they simply "borrow" from the "human beans" who live above them. It's a comfortable life, but boring if you're a kid. Only Pod is allowed to venture into the house above, because the danger of being seen by a human is too great. Rated PG.

Charlotte's Web by E.B. White
Wilbur, the pig, is desolate when he discovers that he is destined to be the farmer's Christmas dinner until his spider friend, Charlotte, decides to help him.
Other booklists with this title -
Newbery Award
Books Every Fourth Grader Should Know
Classics to Read Aloud

Charlotte's Web by  Paramount
Wilbur the pig is saved from certain death and Fern visits him every day at her Uncle Homer's farm. But it's Wilbur's friendship with Charlotte the spider that ultimately saves him from the smoke house. Rated G. 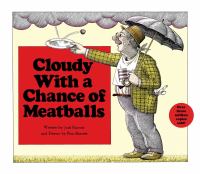 Cloudy with a Chance of Meatballs by Judi Barrett
Life is delicious in the town of Chewandswallow where it rains soup and juice, snows mashed potatoes, and blows storms of hamburgers--until the weather takes a turn for the worse.

Cloudy With a Chance of Meatballs by  Sony Pictures
Flint Lockwood is a young inventor who dreams of creating something that will improve everyone's life. In a town where food drops from the sky like rain, Flint hopes to create something that will change everyone's life. However, when the weather takes a turn for the worse, the residents of the town of Chewandswallow will find their eating habits have drastically changed. Rated PG.

Ferdinand by  20th Century Fox
After Ferdinand, a bull with a big heart, is mistaken for a dangerous beast, he is captured and torn from his home. Determined to return to his family, he rallies a misfit team on the ultimate adventure. Rated Pg.

James and the Giant Peach by Roald Dahl
A young boy escapes from two wicked aunts and embarks on a series of adventures with six giant insects he meets inside a giant peach.

James and the Giant Peach by  Walt Disney
After the daring rescue of a spider, a young boy named James gains possession of some magic crocodile tongues. When James spills them in the garden, out sprouts an enormous peach! Climbing inside, he meets an astonishing cast of characters and embarks on a magical odyssey full of thrills and adventure. Rated PG. 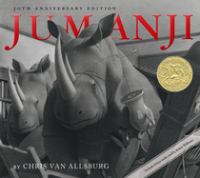 Jumanji by Chris Van Allsburg
Left on their own for an afternoon, two bored and restless children find more excitement than they bargained for in a mysterious and mystical jungle adventure board game. Includes CD read by Robin Williams.

Jumanji by  Sony Pictures
When young Alan Parrish discovers a mysterious board game, he doesn't realize its unimaginable powers, until he is magically transported into the untamed jungles of Jumanji! There he remains for 26 years until he is freed from the game's spell by two unsuspecting children. Rated PG.

Mr. Popper's Penguins by Richard Atwater
The unexpected delivery of a large crate containing an Antarctic penguin changes the life and fortunes of Mr. Popper, a house painter obsessed by dreams of the Polar regions.
Other booklists with this title -
Newbery Award
Books Every Fourth Grader Should Know
Classics to Read Aloud

The Borrowers by Mary Norton
Beneath the kitchen floor is the world of the Borrowers -- Pod and Homily Clock and their daughter, Arrietty. In their tiny home, matchboxes double as roomy dressers and postage stamps hang on the walls like paintings. Whatever the Clocks need they simply borrow from the human beans who live above them. It's a comfortable life, but boring if you're a kid. Only Pod is allowed to venture into the house above, because the danger of being seen by a human is too great. Borrowers who are seen by humans are never seen again. Yet Arrietty won't listen. There is a human boy up there, and Arrietty is desperate for a friend.

The Secret Garden by Frances Hodgson Burnett
After becoming an orphan, ill-tempered and neglected Mary is sent to live on an uncle's huge estate where she meets an equally wretched, invalid cousin. Together they conspire to restore a locked secret garden while her cousin regains his health and his father's affection.

The Secret Garden by  Warner Bros.
A young orphan named Mary is sent to live at the dark and foreboding English estate of her widowed uncle. She discovers a secret garden which was abandoned after a tragic accident. With the help of her crippled cousin Colin, and Dickon the country boy, her spirit is gradually reawakened as they bring the garden back to life. Rated G 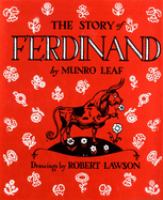 The Story of Ferdinand by Munro Leaf
All the other bulls would run and jump and butt their heads together. But Ferdinand would rather sit and smell the flowers. So what will happen when our pacifist hero is picked for the bullfights in Madrid?
Updated 11/19/2020
Find this booklist online at http://thelibrary.org/kids/books/booklist.cfm