If you liked "To Kill a Mockingbird," you might also enjoy...

A Lesson Before Dying by Ernest J. Gaines
In a small Cajun community in the late 1940s, a young black man named Jefferson is an unwilling party to a liquor store shootout in which three men are killed. The only survivor, he is convicted of murder and sentenced to death. Many years later, a young teacher returns to 1940s Cajun country visits Jefferson on death row. Together they come to understand the heroism of resisting.

A Time to Kill by John Grisham
A murder trial brings a small Mississippi town's racial tensions to the flashpoint. Amid a frenzy of activist marches, Klan terror, media clamor and brutal riots, an unseasoned but idealistic young attorney mounts a stirring courtroom battle for justice.

Cane River by Lalita Tademy
Set among the plantations in deepest Louisiana, "Cane River" follows the lives of five generations of women from the time of slavery in the early 1800s into the early years of the 20th century. From down-trodden, philosophical Suzette, who was born and died a slave, to educated, pale-skinned Emily, whose high ambitions born in freedom become her downfall, we are introduced to a remarkable cast of characters whose struggles reflect the tragedy of slavery and, ultimately, the triumph of the spirit.

Cold Sassy Tree by Olive Ann Burns
On July 5, 1906, scandal breaks in the small town of Cold Sassy, Georgia, when the proprietor of the general store, E. Rucker Blakeslee, elopes with Miss Love Simpson. He is barely three weeks a widower, and she is only half his age and a Yankee to boot. As their marriage inspires a whirlwind of local gossip, fourteen-year-old Will Tweedy (Rucker's grandson) suddenly finds himself eyewitness to a family scandal, and that's where his adventures begin.

Cry, The Beloved Country by Alan Paton
In search of missing family members, Zulu priest Stephen Kumalo leaves his South African village to traverse the deep and perplexing city of Johannesburg in the 1940s. With his sister turned prostitute, his brother turned labor protestor and his son, Absalom, arrested for the murder of a white man, Kumalo must grapple with how to bring his family back from the brink of destruction as the racial tension throughout Johannesburg hampers his attempts to protect his family.

God's Little Acre by Erskine Caldwell
While a dirt farmer named Ty Ty Walden spends 15 years digging holes in his fields looking for gold, his hot-headed sons do less digging and more squabbling over women. Add a lascivious brother-in-law who has been laid off from his job in a mill, another brother from the city who shows up to steal his brother's wife, and a promiscuous sister named Darlin' Jill, and the final blowup is hardly surprising. But there are other less predictable surprises as the story veers toward melodrama. With murder and rape following a killing at the mill, it is as if Caldwell flipped a switch from "farce" to "tragedy."

Let the Circle Be Unbroken by Mildred D. Taylor
Four black children growing up in rural Mississippi during the Depression experience racial antagonisms and hard times, but learn from their parents the pride and self-respect they need to survive.
Series -
The Logan Family - Mildred D. Taylor
Other booklists with this title -
Coretta Scott King Author Award

Peace Like a River by Leif Enger
Eleven-year-old Reuben Land, an asthmatic boy obsessed with cowboys, living in 1960s Minnesota, tells the story of his family's cross-country search for his outlaw older brother, who has been charged with murder
Other booklists with this title -
If you liked "The Lovely Bones," you might also enjoy...

Snow Falling On Cedars by David Guterson
In this tender yet tense novel, a Japanese-American fisherman stands trial for murder in an atmosphere of racism and unrequited love.

Sounder by William H. Armstrong
Angry and humiliated when his sharecropper father is jailed for stealing food for his family, a young black boy grows in courage and understanding by learning to read and with the help of the devoted dog Sounder.
Other booklists with this title -
Mark Twain Award Winners
Newbery Award 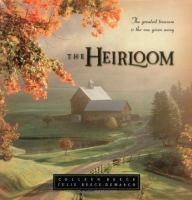 The Heirloom by Colleen L. Reece
Rev. David Allen, a preacher in a North Carolina mountain town during the Depression, feels overwhelmed by the poverty of his parishioners. One Christmas, he sells his only valuable possession, a rare heirloom Bible to buy shoes for the children in his church. But by the following Christmas, harsh conditions remain the same, and he despairs that his sacrifice has made no lasting difference. Then a letter arrives to tell him his old Bible has begun a ministry all its own. As the Bible makes its way across the country, seven strangers write to David (whose name and address were written inside the Bible's cover) to explain how its message has transformed them.

The Yearling by Marjorie Kinnan Rawlings
Young Jody adopts an orphaned fawn he calls Flag and makes it a part of his family and his best friend. But life in the Florida backwoods is harsh, so his family fights off wolves, bears, and even alligators, and faces failure in their tenuous subsistence farming.

Their Eyes Were Watching God by Zora Neale Hurston
Janie Crawford, an attractive, confident, middle-aged black woman, returns to Eatonville, Florida, after a long absence. The black townspeople gossip about her and -speculate about where she has been and what has happened to her young husband, Tea Cake. They take her confidence as aloofness, but Janie's friend Pheoby Watson sticks up for her. Pheoby visits her to find out what has happened. Their conversation frames the novel.
Other booklists with this title -
Classic African American Fiction
American Literature Classics

Wish You Well by David Baldacci
The year is 1940. After a car accident kills 12-year-old Lou's and 7-year-old Oz's father and leaves their mother Amanda in a catatonic trance, the children find themselves sent from New York City to their great-grandmother Louisa's farm in Virginia. Louisa's hardscrabble existence comes as a profound shock to precocious Lou and her shy brother. Still struggling to absorb their abandonment, they enter gamely into a life that tests them at every turn--and offers unimaginable rewards.
Updated 08/26/2016
Find this booklist online at http://thelibrary.org/kids/books/booklist.cfm