Bernice Buttman, Model Citizen by  Niki Lenz
Bernice Buttman is tired of being labeled a 'bully,' so when her mom leaves her with her aunt, who is a nun, Bernice decides to mend her ways and become a model citizen.

Charlie Thorne and the Last Equation by Stuart Gibbs
The CIA forces twelve-year-old Charlotte Charlie Thorne, a rebellious genius, to use her code-breaking skills on an epic global chase to locate Einstein's last equation before dangerous agents discover it and unlock the solution to harnessing energy.

Me and Sam-Sam Handle the Apocalypse by Susan Vaught
Jesse is on the case when money goes missing from the library and her dad is looking like the #1 suspect.

New Kid by  Jerry Craft
Seventh grader Jordan Banks loves nothing more than drawing cartoons about his life. But instead of sending him to the art school of his dreams, his parents enroll him in a prestigious private school known for its academics, where Jordan is one of the few kids of color in his entire grade. As he makes the daily trip from his Washington Heights apartment to the upscale Riverdale Academy Day School, Jordan soon finds himself torn between two worlds--and not really fitting into either one. 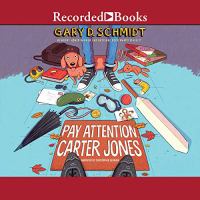 Pay Attention, Carter Jones by  Gary D Schmidt
Sixth-grader Carter must adjust to the unwelcome presence of a know-it-all butler who is determined to help him become a gentleman, and also to deal with burdens from the past.

Shine! by  J. J Grabenstein
When seventh-grader Piper's father is hired by Chumley Prep, a school where every student seems to be the best at everything, she gets the chance to compete for the prestigious Excelsior Award.

Shouting at the Rain by Lynda Mullaly Hunt
Delsie loves tracking the weather, living with her grandmother, and the support of friends and neighbors, but misses having a regular family, especially after her best friend outgrows her.

Song for a Whale by Lynne Kelly
Twelve-year-old Iris and her grandmother, both deaf, drive from Texas to Alaska armed with Iris's plan to help Blue-55, a whale unable to communicate with other whales.

The Bridge Home by  Padma Venkatraman
Life is harsh in Chennai's teeming streets, so when runaway sisters Viji and Rukku arrive, their prospects look grim. Very quickly, eleven-year-old Viji discovers how vulnerable they are in this uncaring, dangerous world. Fortunately, the girls find shelter--and friendship--on an abandoned bridge. With two homeless boys, Muthi and Arul, the group forms a family of sorts. And while making a living scavenging the city's trash heaps is the pits, the kids find plenty to laugh about and take pride in too. After all, they are now the bosses of themselves and no longer dependent on untrustworthy adults. But when illness strikes, Viji must decide whether to risk seeking help from strangers or to keep holding on to their fragile, hard-fought freedom. Set in India.

The Memory Keeper by  Jennifer Camiccia
Twelve-year-old Lulu Rose Carter's memory improves greatly just as her beloved Gram becomes very forgetful, and Lulu begins to explore Gram's past in an effort to save her.

The Unsung Hero of Birdsong, USA by  Brenda (Brenda A.) Woods
Gabriel, twelve, gains new perspective when he becomes friends with Meriwether, a Black World War II hero who has recently returned to the unwelcoming Jim Crow South.

White Bird : A Wonder Story by R. J. Palacio
Tells the story of Julian's Grandmére's childhood as she, a Jewish girl, was hidden by a family in a Nazi-occupied French village during World War II and how the boy she once shunned became her savior and best friend.
View past nominees lists...
Find this booklist online at http://thelibrary.org/kids/books/tpl_winner_nominees.cfm