The Truman Readers Award encourages students in the early teen years to express their unique voice through exploring new literary genres, communicating with their peers about young adult literature, and honoring authors writing for young teens. Missouri school children in middle school/junior high vote for their favorite book from a list of nominated titles. The Truman Readers Award is awarded to the author of this book by the Missouri Association of School Librarians.

The Unteachables
by Gordon Korman

"Told in alternating voices, the teacher and students in room 117 find their lives changed over the course of a school year."

During a massive blackout in rural Nevada, two brothers struggle to survive without their self-reliance-obsessed dad and without enough water cross the desert for help.

Before the Ever After
by  Woodson. Jacqueline

ZJ's friends Ollie, Darry and Daniel help him cope when his father, a beloved professional football player, suffers severe headaches and memory loss that spell the end of his career.

Closer to Nowhere
by Ellen Hopkins

Told in two voices, sixth-grade cousins Hannah and Cal learn a lot about family when circumstances throw them together under one roof and Hannah's love of order clashes with Cal's chaotic behavior.

Depending on an older sister who protected her when their mother went to prison and their mother's boyfriend committed a terrible act, 10-year-old Della tries to figure out what to do when her older sister attempts suicide.

Regan Fitz and Elliot Mason have been enemies since they started training to become Glitchers--people who travel through time to preserve important historical events. But everything changes when they find a letter from Regan's future self, warning them about an impending disaster that threatens them and everyone they know. Will they be able to set aside their past in order to save the future?--Amazon.com

In nineteenth-century Copenhagen, an orphaned seamstress goes to work for a retired ballerina and uses her magic to investigate her father's mysterious death while working for the same family years ago--|cProvided by publisher.

The Canyon's Edge
by  Dusti Bowling

A year after the death of her mother in a restaurant shooting, Nora is left struggling to stay alive when a climbing trip with her father goes terribly wrong.

The Kinder Poison
by  Natalie Mae

In the magical kingdom of Orkena, a teenaged girl is chosen to be the human sacrifice in a deadly game between three heirs who will do anything for the crown.

The Light in Hidden Places : A Novel Based on the True Story of Stefania Podgorska
by  Sharon Cameron

Sixteen-year-old Catholic Stefania Podgórska has worked in the Diamant family's grocery store for four years, even falling in love with one of their sons, Izio; but when the Nazis came to Przemsyl, Poland, the Jewish Diamants are forced into the ghetto (and worse) and only Izio's brother Max manages to escape. Stefania embarks on a dangerous course--protecting thirteen Jews in her attic, caring for her younger sister, Helena, and keeping everything secret from the two Nazi officers who are living in her house. Based on the true story of Stefania Podgórska. Includes an author's note that outlines the later lives of Stefania, and the many of the other people who appear in the book.

The Stars We Steal
by  Alexa Donne

Princess Leonie Kolburg, aged nineteen and heir to a faded European spaceship, enters the engagement season hoping only to save her family from financial ruin, but is soon falling for her first, rejected love.

Seventh-grader Frankie, who has various sensory disorders, is determined to find her missing best friend, Colette, before it is too late. 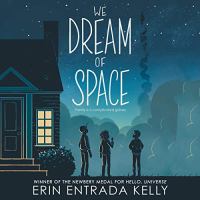 We Dream of Space
by Erin Entrada Kelly

Cash, Fitch, and Bird Thomas are three siblings in seventh grade together in Park, Delaware. In 1986, as the country waits expectantly for the launch of the Space Shuttle Challenger, they each struggle with their own personal anxieties. Cash, who loves basketball but has a newly broken wrist, is in danger of failing seventh grade for the second time. Fitch spends every afternoon playing Major Havoc at the arcade on Main. And Bird, his twelve-year-old twin, dreams of being NASA's first female shuttle commander. The Thomas children exist in their own orbits, circling a tense and unpredictable household, with little in common except an enthusiastic science teacher named Ms. Salonga. As the launch of the Challenger approaches, Ms. Salonga gives her students a project; they are separated into spacecraft crews and must create and complete a mission. When the fated day finally arrives, it changes all of their lives and brings them together in unexpected ways.