Neil Gaiman, Sandman and the Rise of the Graphic Novel 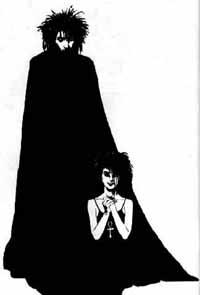 In 1988, DC Comics gave the helm of one of their off-beat, morgue titles to Neil Gaiman and comic books have never been the same since.

During its seven-year run, Sandman included literary references to comics from the distant past as well many of his contemporaries mentioned above, William Shakespeare (a recurring character), John Milton, and Greek, Roman, Norse & Celtic mythology. It contained cameos from history: Caesar Augustus, Marco Polo, Cardinal Richelieu, Mark Twain, and Emperor Norton I of the United States (look it up, he’s real). Characters that you meet in the first few issues play deeply instrumental roles in the series conclusion. The story arc touches on the dangers of pride, the value of apology, the ineffable grace of forgiveness. It deals with death, friendship, loss, joy, and life. It manages all of this because, ultimately, it’s about stories.

The exceptionality of the Sandman series has earned it much positive recognition including becoming one of the first graphic novels ever to be on The New York Times Best Sellers list. In 1991 it became the first comic to be awarded the World Fantasy Award for Best Short Fiction (as of this writing, it is still the only comic to do so). Additionally, the series has won 26 Eisner Awards including three for Best Continuing Series, one for Best Short Story, and four for Best Writer. It has won two Bram Stoker Awards for Best Illustrated Narrative. And in 2003 it won the International Comics Festival Prize for Scenario.

In this first volume, an occultist attempting to capture Death to bargain for eternal life traps her younger brother Dream instead. After his 70 year imprisonment and eventual escape, Dream, also known as Morpheus, goes on a quest for his lost objects of power. On his arduous journey Morpheus encounters Lucifer, John Constantine, and an all-powerful madman. This book also includes the story "The Sound of Her Wings," which introduces us to the pragmatic and perky goth girl Death.

During Morpheus's incarceration, three dreams escaped the Dreaming and are now loose in the waking world. At the same time, a young woman named Rose Walker is searching for her little brother. As their stories converge, a vortex is discovered that could destroy all dreamers, and the world itself. Features an introduction by Clive Barker.

In each of these otherwise unrelated stories, Morpheus serves only as a minor character. Here we meet the mother of Morpheus's son, find out what cats dream about, and discover the true origin behind Shakespeare's A Midsummer's Night Dream.

Ten thousand years after banishing to Hell a woman who scorned him, Morpheus, the King of Dreams, has decided to free his former lover. But when he arrives in Hell, Lucifer, the first fallen angel, notifies him that he is closing down Hell and wants Morpheus to have the keys. Now in charge of the gates of Hell, the King of Dreams is bombarded with requests for possession of the empty kingdom by Norse gods, homeless demons, Egyptian deities, Faerie ambassadors, the lords of Chaos and Order, and Japanese divinities. Realizing too late that Lucifer's gift was a veiled curse, Morpheus is forced to make a decision that will affect every plane of existence as well as the universal balance of power.

A Game of You (electronically from Hoopla Digital)

Since she was a child, Barbie has dreamed of a world in which she was a princess. But after separating from her husband, she has ceased to dream, and her fantasy kingdom has been savagely overrun by an evil entity known as the Cuckoo. Now, as elements of her fantasy world cross over and begin to drastically affect reality, Barbie and her friends venture into the realm of dreams to save its peaceful inhabitants. But against the power of dark and dying dreams, even the combined might of a witch, two lesbian lovers, a transsexual, and a decapitated talking head might not be enough to save two different planes of existence.

In this volume, Morpheus, the King of Dreams, observes and interacts with an odd assortment of historical and fictional characters throughout time. Featuring tales of kings, explorers, spies, and werewolves, this book of myth and imagination delves into the dark dreams of Augustus Caesar, Marco Polo, Cain and Abel, Norton I and Orpheus to illustrate the effects that these subconscious musings have had on the course of history and mankind.

The Endless are a dysfunctional family of cosmic beings that have ruled over the realms of dream, desire, despair, destiny, destruction, death and delirium since the beginning of time. But three hundred years ago, one of the mythical beings gave up his duties and left his realm, never to be seen again. Brief Lives tells the tales of Delirium and older brother Dream on a mission to find their missing sibling, as they encounter immortal humans and various deities while trying to locate the prodigal Destruction. Their adventure draws Dream into a final, tragic confrontation with his son Orpheus and he learns the true meaning of fate and consequences.

Reminiscent of the legendary Canterbury Tales, World's End is a wonderful potpourri of engrossing tales and masterly storytelling. Improbably caught in a June blizzard, two wayward compatriots stumble upon a mysterious inn and learn that they are in the middle of a "reality storm." Now surrounded by a menagerie of people and creatures from different times and realities, the two stranded travelers are entertained by mesmerizing myths of infamous sea creatures, dreaming cities, ancient kings, astonishing funeral rituals and moralistic hangmen.

The Kindly Ones (electronically from Hoopla Digital)

In this volume, threads of story introduced in The Doll's House, Dream Country and Season of Mist begin to come together. Distraught by the kidnapping and presumed death of her son, and believing Morpheus to be responsible, Lyta Hall calls the ancient wrath of the Furies down upon him. The 'kindly ones' enter his realm and force a sacrifice that will change the Dreaming forever.

The Wake (electronically from Hoopla Digital)

As a being of infinite power, Morpheus has ruled over the realm of the Dreaming since the beginning of time. But now after a tragic fall, Morpheus (or at least, one version of him) is no more. In the touching and final chapter of this fantastical legend, friends, siblings, enemies and lovers gather to mourn and honor the fallen Lord. Realistically depicting the feelings of loss and despair associated with death, The Wake is an emotional tale of remembrance and rebirth.