Once you have finished "True Grit," why not learn a little bit more about the men behind the story, including the author Charles Portis and the "real Rooster Cogburn." (The author of "Escape Velocity," Jay Jennings, will visit the Library Center on April 7 at 7p.m.)

Films: Two films have been made based on "True Grit."  Why not check out both to see which one is your favorite?

Outlaws: Outlaws have always been a fascinating part of western stories including "True Grit." Check out a few of these titles to learn more about some of America's most famous outlaws.

Lawmen: Now that you know about Rooster Cogburn, why not learn about some of the great lawmen of the American West.

The American West:  Did you enjoy the American West setting of "True Grit"? If so you can learn even more about it from the real people who experienced it.

Western Titles: Westerns have always been a popular genre, with their exciting characters and settings. These titles are no exception.

For the young and young at heart:  Hank the Cowdog is a beloved childen's book character who has been the "Head of Ranch Security" since the publishing of his first book in 1982. (Hank the Cowdog author John Erickson will be visiting the Springfield Art Museum for a library Big Read event on April 21 at 7p.m.) 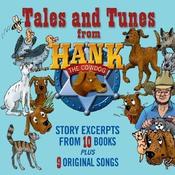