From the National Orphan Train Complex on orphan train history:

From 1854 to 1929 an estimated 250,000 orphaned, abandoned, and homeless children were placed throughout the United States and Canada during the Orphan Train Movement.

When the orphan train movement began, it was estimated that 30,000 abandoned children were living on the streets of New York City.

The aid institutions developed a program that placed homeless children into homes throughout the country. The children were transported to their new homes on trains which were eventually labeled “orphan trains.”

This period of mass relocation of children in the United States is widely recognized as the beginning of documented foster care in America.

Learn more about the orphan trains and their riders with one of the following books or let the Library provide an orphan train program at your next group meeting. For more information, or to book a speaker, email bookaspeaker@thelibrary.org or call (417) 883-6112.

As an "orphan train" crossed the country, it left part of its cargo at each stop, a few children in one small town and a few in another. Even though farmers needed many hands for labor, most of the small farm communities could not or would not take all of the children on the train. As the train moved to its next stop, those children not taken feared no one would ever want them.

Holt captures the children's perspective with the judicious use of oral histories, institutional records, and newspaper accounts. This well-written volume sheds new light on the multifaceted experience of children's immigration, changing concepts of welfare, and Western expansion. 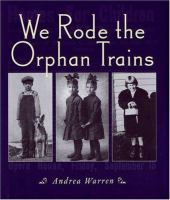 Andrea Warren has shared the stories of some of the orphan train riders. Read the stories of child orphans as they share their memories of transition and adventure, disappointment and loneliness, but ultimately of the joy of belonging to their own new families. 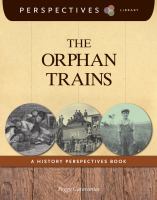 This book relays the factual details of the orphan trains that sent East Coast orphans to be with families in the Midwest and West. The narrative provides multiple accounts of the event, and readers learn details from the point of view of an orphan child heading to the Midwest, a Midwestern family awaiting a child, and a New York City child welfare worker.

From 1853 to 1929, Brace's Children's Aid Society and other charities sent more than 150,000 neglected children by train to 47 states. Most were treated kindly and formed loving bonds with new parents. Hear the remarkable stories of the Orphan Train children. (PBS American Experience DVD)