Old Mill to Come Tumbling Down

"Fifty-four years ago, the Greene County Roller mills, later known as the Rothermel Brothers Milling Company, began turning out a barrel of flour an hour for area distribution. Today, the rather dilapidated mill located on North National Road, across for Greenlawn Cemetery, is being dismantled and pieces of the inside structure and machinery are being sent to Silver Dollar City where they will become part of a new mill. 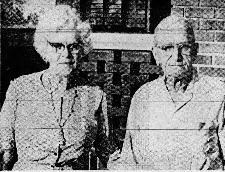 "Mr. and Mrs. Frank Rothermel, 3530 North National, were the first owners and original builders of the mill. Rothermel, returning from World War I, sold part of the business to his brother, Earl, and the Greene County Rolling Mill became the Rothermel Brothers Milling Company. It remained in operation until 1935, and then was used as a sales room and warehouse. During World War II the old iron machinery was melted down for government use."