This year we will mark the 50th anniversary of humanity's first steps on the moon and Project Apollo’s ultimate success of President John F. Kennedy's goal of "landing a man on the Moon and returning him safely to the Earth.” Check out these books and documentaries that explore the history of this amazing accomplishment, some coming straight from the men and women who were there when mankind first adventured into the stars.

Apollo 8 : The Thrilling Story of the First Mission to the Moon by Jeffrey Kluger

Written with all the color and verve of the best narrative non-fiction, Apollo 8 takes us from Mission Control to the astronaut’s homes, from the test labs to the launch pad. The race to prepare an untested rocket for an unprecedented journey paves the way for the hair-raising trip to the moon. Then, on Christmas Eve, a nation that has suffered a horrendous year of assassinations and war is heartened by an inspiring message from the trio of astronauts in lunar orbit. And when the mission is over—after the first view of the far side of the moon, the first earth-rise, and the first re-entry through the earth’s atmosphere following a flight to deep space—the impossible dream of walking on the moon suddenly seems within reach. 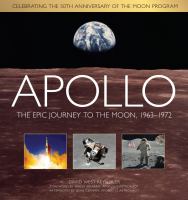 Featuring a wealth of rare photographs, artwork, and cutaway illustrations, Apollo recaptures the excitement of the USA’s journey to the moon. From the adventurous astronauts to the scientists and engineers who designed and built the state-of-the-art spacecraft, Reynolds covers every aspect of this epic voyage. Through concise description, he introduces the uninitiated to this thrilling episode in U.S. history while also providing engaging details for the space aficionado. All of the key events and personalities are presented, creating a clear picture of how we got to the moon and what happened along the way. The detailed and meticulously labeled diagrams and maps give the reader an in-depth understanding of the technology that carried the astronauts to the moon and what they accomplished while they were there.

The Earth Gazers : On Seeing Ourselves by Christopher Potter

Only 24 people have seen the whole earth. The most beautiful and influential photographs ever made were taken, almost as an afterthought, by the astronauts of the Apollo space program from the moon. The Earth Gazers is a book about the long road to the capture of the unforgettable images of Earth taken from space. It is a history of the space program and of the ways in which it transformed our view of the earth and changed the lives of the astronauts who walked in space and on the moon.  These 24 people saw Earth in all its singular glory, and the legacy of the stories of these "Earth Gazers," resonate richly even today.

Falling to Earth : An Apollo 15 Astronaut's Journey by Al Worden

As command module pilot for the Apollo 15 mission to the moon in 1971, Al Worden flew on what is widely regarded as the greatest exploration mission that humans have ever attempted. He spent six days orbiting the moon, including three days completely alone, the most isolated human in existence. During the return from the moon to earth he also conducted the first spacewalk in deep space, becoming the first human ever to see both the entire earth and moon simply by turning his head. The Apollo 15 flight capped an already-impressive career as an astronaut, including important work on the pioneering Apollo 9 and Apollo 12 missions, as well as the perilous flight of Apollo 13. An unprecedentedly candid account of what it was like to be an Apollo astronaut, with all its glory but also its pitfalls

First Man on the Moon NOVA

NOVA presents an intimate portrait of Neil Armstrong. Seen through the eyes of those who were close to him, the film explores the man behind the myth, and also reveals his unsung achievements as a Navy combat veteran and pioneer of high-speed flight.

First Man : The Life of Neil A. Armstrong by James R. Hansen

On July 20, 1969, the world stood still to watch 38-year-old American astronaut Neil A. Armstrong become the first person ever to step on the surface of another heavenly body. Upon his return to Earth, Armstrong was celebrated for his monumental achievement. He was also--as NASA historian Hansen reveals in this authorized biography--misunderstood. Armstrong's accomplishments as an engineer, a test pilot, and an astronaut have long been a matter of record, but Hansen's access to private documents and unpublished sources and his interviews with more than 125 subjects (including more than fifty hours with Armstrong himself) yield the first in-depth analysis of this elusive, reluctant hero. Hansen recreates Armstrong's flying career, from his combat missions over North Korea to his transatmospheric flights in the rocket-powered X-15 to the first-ever docking in space. For a pilot who cared more about flying to the Moon than he did about walking on it, Hansen asserts, Armstrong's storied vocation exacted a dear personal toll, paid in kind by his wife and children 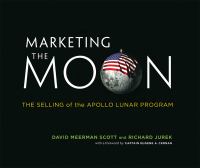 Marketing the Moon : The Selling of the Apollo Lunar Program by David Meerman Scott and Richard Jurek

One of the most successful public relations campaigns in history, featuring heroic astronauts, press-savvy rocket scientists, enthusiastic reporters, deep-pocketed defense contractors, and Tang. In July 1969, 94 percent of American televisions were tuned to coverage of Apollo 11's mission to the moon. How did space exploration, once the purview of rocket scientists, reach a larger audience than My Three Sons? Why did a government program whose standard operating procedure had been secrecy turn its greatest achievement into a communal experience? In Marketing the Moon, David Meerman Scott and Richard Jurek tell the story of one of the most successful marketing and public relations campaigns in history: the selling of the Apollo program.

Moonshot : The Inside Story of Mankind's Greatest Adventure by Dan Parry

Simultaneously connected and separated by television, millions of people around the world held their breath as a human being looked back at them from the surface of the Moon. Yet who were these men capable of such an achievement? How did the passionate Buzz Aldrin, inscrutable Michael Collins and enigmatic Neil Armstrong learn to depend on one another as they endured the most intense period of their lives?

From the personal tragedies and triumphs they encountered along the way to the terrifying climax of a mission that redefined humanity, Moonshot draws on interviews with many of the leading participants and hundreds of hours of archive material to tell the compelling true story of an event that captured the imagination of generations, then and now.

Rocket Men : The Daring Odyssey of Apollo 8 and the Astronauts Who Made Man's First Journey to the Moon by Robert Kurson

By August 1968, the American space program was in danger of failing in its two most important objectives: to land a man on the Moon by President Kennedy's end-of-decade deadline, and to triumph over the Soviets in space. With its back against the wall, NASA made an almost unimaginable leap: It would scrap its usual methodical approach and risk everything on a sudden launch, sending the first men in history to the Moon--in just four months. And it would all happen at Christmas. Drawn from hundreds of hours of one-on-one interviews with the astronauts, their loved ones, NASA personnel, and myriad experts, and filled with vivid and unforgettable detail, "Rocket Men" is the definitive account of one of America's finest hours. In this real-life thriller, Kurson reveals the epic dangers involved, and the singular bravery it took, for mankind to leave Earth for the first time--and arrive at a new world

To the Moon NOVA

The mission seemed impossible, the odds astronomical, but the results were spectacular. NOVA presents the fascinating story behind the Apollo space program, including the historic walk on the moon in 1969, in a two-hour special. Meet unsung heroes, experience the dangers, and discover new Apollo perspectives through rare footage, little-known facts, and interviews with NASA scientists, engineers, geologists, and the astronauts themselves. 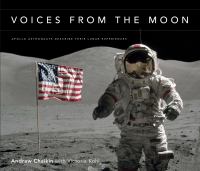 Voices from the Moon : Apollo Astronauts Describe Their Lunar Experiences by Andrew Chaikin with Victoria Kohl

Using never-before-published quotes taken from his in-depth interviews with 23 of the 24 Apollo lunar astronauts, Chaikin and his collaborator, Victoria Kohl, have created an extraordinary account of the lunar missions. Here, astronauts vividly recount their experiences in intimate detail - their distinct personalities and remarkably varied perspectives emerge from their candid and deeply personal reflections. Carefully assembled into a narrative that reflects the entire arc of the lunar journey, Voices from the Moon captures the magnificence of the Apollo program like no other.