Fiction in the Garden

These books can be enjoyed whether or not you’ve got a green thumb for spring. Places where things grow, gardens and orchards, play a central role. Visit forgotten gardens, go behind the scenes at flourishing nurseries and greenhouses, and tag along with sleuthing landscapers. These books are best read on a park bench or near an open window.

At the Edge of the Orchard by Tracy Chevalier
Settling in the swamps of early 19th-century northwest Ohio, the Goodenough family works relentlessly to establish an apple orchard that reflects respective dreams before their youngest child heads to Gold Rush California to collect seeds for a naturalist.

Blue Dahlia by Nora Roberts
Trying to escape the ghosts of the past, young widow Stella Rothchild, along with her two energetic little boys, has moved back to her roots in southern Tennessee and into her new life at Harper House and the In the Garden nursery. She isn't intimidated by the house nor by its mistress, local legend Roz Harper. Despite a reputation for being difficult, Roz has been nothing but kind to Stella, offering her a comfortable new place to live and a challenging new job as manager of the flourishing nursery. As Stella settles comfortably into her new life, she finds a nurturing friendship with Roz and with expectant mother Hayley. And she discovers a fierce attraction to ruggedly handsome landscaper Logan Kitridge. He's difficult but honest, brash but considerate and undeniably sexy. And for a sensible woman like Stella, he may be just what she needs..

Garden Spells by Sarah Addison Allen
In a garden surrounded by a tall fence, tucked away behind a small, quiet house in an even smaller town, is an apple tree that is rumored to bear a very special sort of fruit. In this luminous debut novel, Sarah Addison Allen tells the story of that enchanted tree, and the extraordinary people who tend it....

The Forbidden Garden by Ellen Herrick
An American nursery owner with a rare gift with plants jumps at the chance to help revive a run-down, Shakespearean garden on a country estate in England and becomes intrigued with the house's haunting history and the owners brother-in-law.

The Garden of Small Beginnings by Abbi Waxman
Rendered a single mom after her husband's fatal car accident, textbook illustrator Lillian recruits her young daughters and supportive sister to help her do research for a boutique vegetable guide at the Los Angeles Botanical Garden, where a patient instructor and quirky gardeners help her grieve and find healing.

The Language of Flowers : A Novel by Vanessa Diffenbaugh
The story of a woman whose gift for flowers helps her change the lives of others even as she struggles to overcome her own past.

The Red Garden by Alice Hoffman
A young wounded civil war solider is saved by a passionate neighbor, a woman meets a fiercely human historical character, a poet falls in love with a blind man, and a mysterious traveler comes to town in the year when summer never arrives. At the center of everyone's life is a mysterious garden where only red plants can grow, and where the truth can be found by those who dare to look. 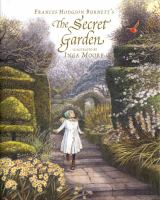 The Secret Garden by Frances Hodgson Burnett
Ten-year-old orphan Mary Lennox comes to live in a lonely house on the Yorkshire moors and discovers an invalid cousin and the mysteries of a locked garden.