In Translation: Horror Novels from Around the World

Read some creepy, scary, and otherwise unsettling stories from writers around the world. These novels were originally published in languages other than English and subsequently translated, and often take place in countries and cultures outside the United States.

Comemadre by Roque Larraquy
1907: A love-struck doctor carries out a cruel and misguided experiment that investigates the threshold between life and death. The premise is that a human head stays alive and conscious for nine seconds after being severed from the body. 2009: A celebrated artist and ex-child prodigy convert bodies into art objects. The halves of the book are held together by a shared interest in the human pursuit of transcendence through bodily intervention. Translated from Spanish.

Dance Dance Dance by Haruki Murakami
Haunted by the sound of someone weeping softly for him, a man in his mid-thirties returns to northern Hokkaido to find her. Translated from Japanese.

Fever Dream : A Novel by Samanta Schweblin
A young woman named Amanda lies dying in a rural hospital clinic. A boy named David sits beside her. She's not his mother. He's not her child. Together, they tell a haunting story of broken souls, toxins, and the power and desperation of family. Translated from Spanish.

Hex by Thomas Olde Heuvelt
Welcome to Black Spring, the seemingly picturesque Hudson Valley town haunted by the Black Rock Witch, a seventeenth-century woman whose eyes and mouth are sewn shut. Muzzled, she walks the streets and enters homes at will. She stands next to children's beds for nights on end. Everybody knows that her eyes may never be opened or the consequences will be too terrible to bear. The elders of Black Spring have virtually quarantined the town by using high-tech surveillance to prevent their curse from spreading. Translated from Dutch.

I Remember You : A Ghost Story by Yrsa Sigurðardóttir
In an isolated village in the Icelandic Westfjords, three friends set to work renovating a rundown house. But soon, they realize they are not as alone as they thought. Something wants them to leave, and it's making its presence felt. Translated from Icelandic.

Let the Right One In by John Ajvide Lindqvist
It is autumn 1981 when inconceivable horror comes to Blackeberg, a suburb in Sweden. The body of a teenager is found, emptied of blood. Twelve-year-old Oskar is personally hoping that revenge for the bullying he endures at school has come at long last. But the murder is not the most important thing on his mind. A new girl has moved in next door. There is something wrong with her, though, something odd. And she only comes out at night... Translated from Swedish. 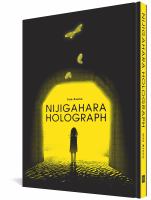 Nijigahara Holograph by Inio Asano
Butterflies ominously proliferate as children whisper rumors of a mysterious creature lurking in the tunnel behind the school. To appease its wrath, they decide to offer it a sacrifice--a human one. Translated from Japanese.

Such Small Hands by Andrés Barba
Life changes at the orphanage the day seven-year-old Marina shows up. She is different from the other girls: at once an outcast and object of fascination. As Marina struggles to find her place, she invents a game whose rules are dictated by a haunting violence. Translated from Spanish.

The Black Spider by Jeremias Gotthelf
It is a sunny summer Sunday in a remote Swiss village, and a christening is being celebrated at a lovely old farmhouse. One of the guests notes an anomaly in the fabric of the venerable edifice: a blackened post that has been carefully built into a trim new window frame. Thereby hangs a tale, one that, as the wise old grandfather who has lived all his life in the house proceeds to tell it, takes one chilling turn after another, while his audience listens in appalled silence. Translated from German.

The Graveyard Apartment by Mariko Koike
After moving to a new apartment complex next to a cemetery, a young Japanese family experiences strange and terrifying occurrences that send the other residents fleeing their homes, ultimately leaving them alone with a dark, evil something, or someone, residing in the basement. Translated from Japanese.

The Hole : A Novel by Hye-y?ng P'y?n
A man wakes paralyzed from a car accident that kills his wife. He's taken care of solely by his mother-in-law, who begins to show erratic behavior as she digs up her daughter's prized garden. Translated from Korean.

The Watcher in the Shadows by Carlos Ruiz Zafón
When fourteen-year-old Irene Sauvelle moves with her family to Cape House on the coast of Normandy, she's immediately taken by the beauty of the place--its expansive cliffs, coasts, and harbors. There, she meets a local boy named Ismael, and the two soon fall in love. But a dark mystery is about to unfold, involving a reclusive toymaker who lives in a gigantic mansion filled with mechanical beings and shadows of the past. Translated from Spanish.

Things We Lost in the Fire : Stories by Mariana Enriquez
A haunting collection of short stories all set in Argentina that has been compared to the work of Shirley Jackson. Translated from Spanish.

Uzumaki : Spiral Into Horror by Junji It?
Kurozu-cho, a small fogbound town on the coast of Japan, is cursed. According to Shuichi Saito, the withdrawn boyfriend of teenager Kirie Goshima, their town is haunted not by a person or being but by a pattern: uzumaki, the spiral, the hypnotic secret shape of the world. Translated from Japanese.