Everybody has asked questions about the things that lay beyond the night sky, but the study of astronomy and physics can be both alluring and daunting.  How can a person be expected to find out more about such a fascinating science when it's all muddled up by complicated vocabulary and mathematics?  Don't give up on your curiosity just yet, because these seven books make big ideas much easier to digest.  These scientists work carefully to unravel the meaning, not the equations, behind the universe's deep mysteries.  Not a rocket scientist?  Then you're in the right place.

The Universe In Your Hand by Christophe Galfard

A theoretical physicist who has worked closely with Stephen Hawking uses direct and simple language to demonstrate the theories behind the functioning of the universe, including what happens when a star dies and the basics of the quantum world. 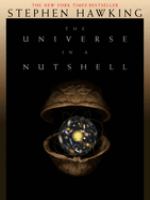 The Universe in a Nutshell by Stephen Hawking

Stephen Hawking's phenomenal, multimillion-copy bestseller, "A Brief History of Time," introduced the ideas of this brilliant theoretical physicist to readers all over the world.
Now, in a major publishing event, Hawking returns with a lavishly illustrated sequel that unravels the mysteries of the major breakthroughs that have occurred in the years since the release of his acclaimed first book.

Astrophysics for People in a Hurry by Neil deGrasse Tyson

While you wait for your morning coffee to brew, for the bus, the train, or a plane to arrive, Astrophysics for People in a Hurry will reveal just what you need to be fluent and ready for the next cosmic headlines: from the Big Bang to black holes, from quarks to quantum mechanics, and from the search for planets to the search for life in the universe.

A Short History of Nearly Everything by Bill Bryson

On his travels through space and time, Bill Bryson encounters a splendid gallery of the most fascinating, eccentric, competitive and foolish personalities ever to ask a hard question. In their company, he undertakes a sometimes profound, sometimes funny, and always supremely clear and entertaining adventure in the realms of human knowledge, as only this superb writer can render it.

Packing for Mars by Mary Roach

Space is a world devoid of the things we need to live and thrive: air, gravity, hot showers, fresh produce, privacy, beer. Space exploration is in some ways an exploration of what it means to be human. How much can a person give up? How much weirdness can they take? What happens to you when you can't walk for a year? What happens if you vomit in your helmet during a space walk? As the author discovers, it's possible to preview space without ever leaving Earth.