The Roaring Twenties: A Decade of Change

The era gave us flappers, some of the great Jazz musicians, prohibition, the 19th amendment, political upheaval and amazing technological advancements. From bootleggers to bright young things, and aviation to Art Deco, check out any of these titles to learn more about how this decade came to be known as the Roaring Twenties.

1920 : The Year That Made the Decade Roar by Eric Burns
Acclaimed author Eric Burns investigates the year of 1920, which was not only a crucial twelve-month period of its own, but one that foretold the future, foreshadowing the rest of the 20th century and the early years of the 21st, whether it was Sacco and Vanzetti or the stock market crash that brought this era to a close.

Flappers : Six Women of a Dangerous Generation by Judith Mackrell
The forefront British dance critic and award-nominated author of Bloomsbury Ballerina presents a revisionist assessment of the movement that shattered the boundaries of conventional femininity through the lives of six figures that exemplified it, including Lady Diana Cooper, Nancy Cunard, Tallulah Bankhead, Zelda Fitzgerald, Josephine Baker and Tamara de Lempicka. 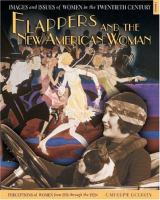 Flappers, and the New American Woman : Perceptions of Women From 1918 Through the 1920s by Catherine Gourley
Looks at the role of women in postwar America, discussing the common perceptions of women at the time--including flappers and housewives--and illustrating how they were reflected in the magazines, catalogs, and films of the time.

Fly Girls : How Five Daring Women Defied All Odds and Made Aviation History by Keith O'Brien
High adventure and high ideals merge when a corps of intrepid female aviators battle to take part in the hugely popular air shows of the 1920s and 1930s. Ultimately, one of our heroines would win a race that earned her the right to be called America's best pilot.

The Ghosts of Eden Park : The Bootleg King, the Women Who Pursued Him, and the Murder That Shocked Jazz- Age America by Karen Abbott
In the early days of Prohibition, long before Al Capone became a household name, a German immigrant named George Remus quits practicing law and starts trafficking whiskey. Within two years he's a multi-millionaire. The press calls him King of the Bootleggers, writing breathless stories about the Gatsby-esque events he and his glamorous second wife, Imogene, host at their Cincinnati mansion, with party favors ranging from diamond jewelry for the men to brand-new Pontiacs for the women. By the summer of 1921, Remus owns 35 percent of all the liquor in the United States. Pioneering prosecutor Mabel Walker Willebrandt is determined to bring him down. Willebrandt's bosses at the U.S. Attorney's office hired her right out of law school, assuming she'd pose no real threat to the cozy relationship they maintain with Remus. Eager to prove them wrong, she dispatches her best investigator, Franklin Dodge, to look into his empire. It's a decision with deadly consequences: with Remus behind bars, Franklin and Imogene begin an affair and plot to ruin him, sparking a bitter feud that soon reaches the highest levels of government--and that can only end in murder.

The Second Coming of the KKK : The Ku Klux Klan of the 1920s and the American Political Tradition by Linda Gordon
By legitimizing bigotry and redefining so-called American values, a revived Klan in the 1920s left a toxic legacy that demands reexamination today.

The St. Valentine's Day Massacre : The Untold Story of the Gangland Bloodbath That Brought Down Al Capone by William J Helmer
The machine-gun murders of seven men on the morning of February 14, 1929, by killers dressed as cops became the gangland crime of the century. Or so the story went. Since then it has been featured in countless histories, biographies, movies, and television specials. 'The St. Valentine's Day Massacre, ' however, is the first book-length treatment of the subject, and it challenges the commonly held assumption that Al Capone ordered the slayings to gain supremacy in the Chicago underworld.

Zora and Langston : A Story of Friendship and Betrayal by Yuval Taylor
Hurston and Hughes, two giants of the Harlem Renaissance and American literature, were best friends--until they weren't. Zora Neale Hurston ("Their Eyes Were Watching God") and Langston Hughes ("The Negro Speaks of Rivers," "Let America Be America Again") were collaborators, literary gadflies, and close companions. They traveled together in Hurston's dilapidated car through the rural South collecting folklore, worked on the play Mule Bone, and wrote scores of loving letters to each other. They even had the same patron: Charlotte Osgood Mason, a wealthy white woman who insisted on being called 'Godmother.' Paying them lavishly while trying to control their work, Mason may have been the spark for their bitter falling-out. Was the split inevitable when Hughes decided to be financially independent of their patron? Was Hurston jealous of the woman employed as their typist? Or was the rupture over the authorship of Mule Bone? Yuval Taylor answers these questions while illuminating Hurston's and Hughes's lives, work, competitiveness and ambition.