The history of Timmons Temple Church of God in Christ began in 1930 when Carter Timmons was appointed to serve in Springfield. The church, built at the intersection of Webster Street and Texas Avenue, served Springfield's African-American community for more than 80 years. When the congregation outgrew the small church building, Timmons Temple was sold and was scheduled to be demolished.

A nonprofit group, Save Timmons Temple, was formed in 2014, and by coordinating financial and in-kind donations, the group was able to raise enough money to have the building moved 600 feet to Silver Springs Park in early 2015. Renamed Timmons Hall, the building was opened to the public in 2019 after four years of restoration work by the nonprofit group that is now named Friends of Timmons Temple. The former church is now an event center operated by the Springfield-Greene County Park Board under the direction of Christine Peoples, its coordinator.

Carter Timmons began preaching in 1917 while a resident of Moberly, Missouri, and was ordained in 1920 in Kansas City. He helped build a church in Moberly. Then he went to Huntsville, Missouri, and established a worship group in a rented tabernacle. In 1925 through the labor of members and friends, a new church was erected. He later preached in Fulton, Missouri, on street corners, private homes and tents until he was able to build a church that opened in 1929.

The Timmons familly was then sent to Springfield in the late summer of 1930, where Timmons began holding services in a storefront. Though times were hard during the Depression, Elder Timmons was able to begin digging the foundation for a new church in 1932.

Carter Timmons also assisted the Church of God in Christ congregations in Hartville and Huntsville, Missouri, and was the superintendent of the Springfield district for more than 40 years. He had six children with his first wife, Anna Mae, who died in 1940, and raised four foster children with his second wife, Vinita. 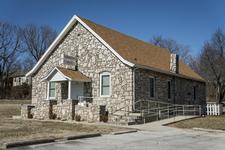