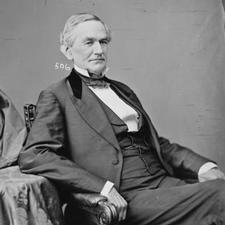 "Laid to Rest; the funeral of ex-governor Phelps

"The remains of ex-Governor John S. Phelps, accompanied by an escort of distinguished gentlemen, arrived in North Springfield early this morning on a special train over the Frisco. A large crowd was at the depot when the train steamed in. The body was encased in an elegant casket, on top of which was a beautiful wreath of white flowers. The remains were taken to the Ozark Hotel to remain until the procession formed.

"The twin cities [meaning Springfield and North Springfield] were draped in mourning in a becoming manner, bells tolled and business was almost suspended for a time.

"About 10:30 o’clock the procession formed on Commercial Street and proceeded west to Boonville, thence north to the public square, which point they reached in the following order:
1. Marshal Morrow on horseback.
2. Gehrs’ band
3. Springfield light infantry, each member wearing crepe on his left arm and carrying [his] gun reversed.
4. John Matthews Post No. 69, G.A.R.
5. Pallbearers.
6. Carriages containing distinguished visitors.
7. Hearse, followed by eight pallbearers.
8. Members of the family of the deceased.
9. Members of the bar in carriages.
10. The mayor and councilmen of Springfield.
11. Carriages containing prominent citizens.
12. Six members of the Springfield Police Force.
13. Hobart’s Military Band of North Springfield.
14. McCroskey G.A.R. post of North Springfield.
15. Springfield Fire Department.
16. North Springfield Hook and Ladder Company. On the truck was the following inscription: ‘North Springfield mourns the death of ex-Governor Phelps.’
17. Citizens in carriages and on foot.

"A draped flag was suspended across Boonville Street at the corner of the square and attracted attention.

"The procession turned east and arrived at Music Hall about 11 o’clock, where appropriate services were conducted by Rev. W.H. Osborne, of the Episcopal Church, lasting until 12 o’clock. Singing by the choir opened the exercises, after which the rector read a chapter from the scriptures, ‘Rock of Ages’ was sung by the choir and impressed all deeply, followed by prayer. After more singing by the choir, Rev. Osborne announced that the body would lie in state half an hour, so all could see the familiar face of their dead friend for the last time. The vast audience then arose and passed up the right aisle and down the left.

"Shortly before 1 o’clock the procession proceeded out St. Louis Street to Dollison, thence south to Cherry, along Cherry to the National Cemetery Road, thence to Hazlewood Cemetery, where the remains were, after a short service, interred.

"The funeral was the largest and most imposing ever held in southwest Missouri.

"Judge W.C. Price, one of the pallbearers, ran for congress against the ex-governor many years ago and was one of his warmest friends. A number of the other pallbearers were raised with him and have watched his honorable career with great interest.

"The people of the twin cities and Greene County have lost a wise counselor, a good citizen, a true friend, the family a kind father, the state and nation a distinguished leader in public affairs. Peace to his ashes." Daily Leader November 27, 1886

For more information about John S. Phelps, see his biography and papers on Community and Conflict Collection. Image courtesy of the Library of Congress.