“We should preserve every scrap of biodiversity as priceless while we learn to use it and come to understand what it means to humanity," says Edward O. Wilson, famed biologist and one of the featured authors on this list.

The current decline of nature is unprecedented in human history. Decreases in biodiversity measures like population numbers, species diversity, and the size, quality, and number of habitats all sound the alarm of the natural world we know being on the brink of extinction.

Why is biodiversity - representing a rich and robust natural world - so important? What does it mean for "nature" to be facing extinction? Why should we be concerned? And what do humans owe other life on this planet? To investigate issues related to biodiversity, extinction, and the resiliency of nature, check out these books:

The Diversity of Life by Edward O Wilson
In this book a master scientist tells the story of how life on earth evolved. Edward O. Wilson eloquently describes how the species of the world became diverse and why that diversity is threatened today as never before. A great spasm of extinction -- the disappearance of whole species -- is occurring now, caused this time entirely by humans. Unlike the deterioration of the physical environment, which can be halted, the loss of biodiversity is a far more complex problem -- and it is irreversible. Defining a new environmental ethic, Wilson explains why we must rescue whole ecosystems, not only individual species. He calls for an end to conservation versus development arguments, and he outlines the massive shift in priorities needed to address this challenge. No writer, no scientist, is more qualified than Edward O. Wilson to describe, as he does here, the grandeur of evolution and what is at stake.

Half-Earth: Our Planet's Fight for Life by Edward O Wilson
In order to stave off the mass extinction of species, including our own, we must move swiftly to preserve the biodiversity of our planet, says Edward O. Wilson in his most impassioned book to date. Half-Earth argues that the situation facing us is too large to be solved piecemeal and proposes a solution commensurate with the magnitude of the problem: dedicate fully half the surface of the Earth to nature.

The Sixth Extinction: An Unnatural History by Elizabeth Kolbert
Provides a moving account of the disappearances occurring all around us and traces the evolution of extinction as concept, from its first articulation by Georges Cuvier in revolutionary Paris up through the present day. The sixth extinction is likely to be mankind's most lasting legacy, compelling us to rethink the fundamental question of what it means to be human. 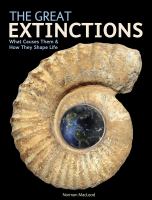 Great Extinctions: What Causes Them and How They Shape Life by Norman MacLeod
A fascinating history of species extinctions, their causes and the looming sixth extinction. Explores the history of this search, its subjects, its controversies, its current conclusions, and their implications for our efforts to preserve Earth's biodiversity. It explains what extinction is, what causes it and whether it is preventable, and by comparing past geological extinction events, it aims to predict what will happen in the future. 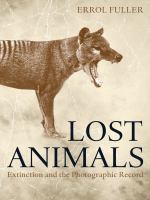 Lost Animals: Extinction and the Photographic Record by Errol Fuller
A photograph of an extinct animal evokes a greater feeling of loss than any painting ever could. Often black and white or tinted sepia, these remarkable images have been taken mainly in zoos or wildlife parks, and in some cases depict the last known individual of the species. Lost Animals is a unique photographic record of extinction, presented by a world authority on vanished animals.

The Worst of Times: How Life on Earth Survived Eighty Million Years of Extinctions by P. B Wignall
Two hundred sixty million years ago, life on Earth suffered wave after wave of cataclysmic extinctions, with the worst wiping out nearly every species on the planet. The Worst of Times delves into the mystery behind these extinctions and sheds light on the fateful role the primeval supercontinent, known as Pangea, might have played in causing these global catastrophes. Drawing on the latest discoveries as well as his own firsthand experiences conducting field expeditions to remote corners of the world, Paul Wignall reveals what scientists are only now beginning to understand about the most prolonged and calamitous period of environmental crisis in Earth's history.

How to Clone a Mammoth: The Science of De-Extinction by Beth Alison Shapiro
Could extinct species like mammoths and passenger pigeons be brought back to life? The science says yes. In this, Beth Shapiro, evolutionary biologist and pioneer in 'ancient DNA' research, walks readers through the astonishing and controversial process of de-extinction. From deciding which species should be restored, to sequencing their genomes, to anticipating how revived populations might be overseen in the wild, Shapiro vividly explores the extraordinary cutting-edge science that is being used--today--to resurrect the past.

Rewilding Our Hearts: Building Pathways of Compassion and Coexistence by Marc Bekoff
A call to reverse the loss of global biodiversity and habitat by changing human attitudes, such as our sense of connection to nature and our enchantment with the world.

After Preservation: Saving American Nature in the Age of Humans by Ben A. Minteer and Stephen J. Pyne (editors)
From John Muir to David Brower, from the creation of Yellowstone National Park to the Endangered Species Act, environmentalism in America has always had close to its core a preservationist ideal. Generations have been inspired by its ethos--to encircle nature with our protection, to keep it apart, pristine, walled against the march of human development. But we have to face the facts. Accelerating climate change, rapid urbanization, agricultural and industrial devastation, metastasizing fire regimes, and other quickening anthropogenic forces all attest to the same truth: the earth is now spinning through the age of humans. After Preservation takes stock of the ways we have tried to both preserve and exploit nature to ask a direct but profound question: what is the role of preservationism in an era of seemingly unstoppable human development, in what some have called the Anthropocene?

Inheritors of the Earth: How Nature Is Thriving in an Age of Extinction by C. D Thomas
Combining a naturalist's eye for wildlife with an ecologist's wide lens, "Inheritors of the Earth" offers an authoritative account of the Anthropocene present and future, a challenge to conventional views of almost everything we do that relates to our interaction with the environment, and an illuminating reexamination of the relationship between humanity and the natural world.

Beloved Beasts: Fighting for Life in an Age of Extinction by Michelle Nijhuis
In the late nineteenth century, as humans came to realize that our rapidly industrializing and globalizing societies were driving other animal species to extinction, a movement to protect and conserve them was born. In Beloved Beasts, acclaimed science journalist Michelle Nijhuis traces the movement's history: from early battles to save charismatic species such as the American bison and bald eagle to today's global effort to defend life on a larger scale.She describes the vital role of scientists and activists such as Aldo Leopold and Rachel Carson as well as lesser-known figures in conservation history; she reveals the origins of vital organizations like the Audubon Society and the World Wildlife Fund; she explores current efforts to protect species such as the whooping crane and the black rhinoceros; and she confronts the darker side of conservation, long shadowed by racism and colonialism.As the destruction of other species continues and the effects of climate change escalate, "Beloved Beasts" charts the ways conservation is becoming a movement for the protection of all species--including our own.

Living Thought the End of Nature: The Future of American Environmentalism by Paul Wapner
Environmentalists have always worked to protect the wildness of nature but now must find a new direction. We have so tamed, colonized, and contaminated the natural world that safeguarding it from humans is no longer an option. Humanity's imprint is now everywhere and all efforts to "preserve" nature require extensive human intervention. At the same time, we are repeatedly told that there is no such thing as nature itself--only our own conceptions of it. One person's endangered species is another's dinner or source of income. Beautifully written and thoughtfully argued, Living through the End of Nature provides a powerful vision for environmentalism's future.

Under a White Sky: The Nature of the Future by Elizabeth Kolbert
The Pulitzer Prize-winning author of "The Sixth Extinction" returns to humanity's transformative impact on the environment, now asking: after doing so much damage, can we change nature, this time to save it?